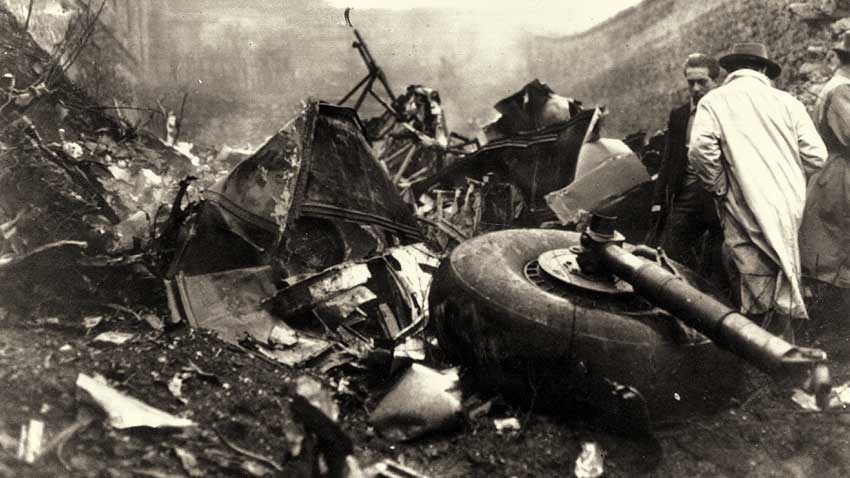 I doubt many people have not heard of the Munich Air Disaster, which caused the deaths of so many of the Manchester United players and staff on February 6th, 1958.

For decades, people blamed the pilot for not refusing to take off in the snowy conditions. What they don’t consider is back then, teams playing abroad, even big teams such as United, didn’t have the finance to stay the extra night to see if the storm would blow out, and who is to say it would have passed that night? An additional night’s stay could have cost the club weeks of income from future league games.

People forget that back then, top players still had to have a job to support their families. There were none of the massive salaries the modern era ask for; if a player, no matter how good, asked for a raise, he was as likely to get his demand as he was to be told the club couldn’t afford him.

I doubt many, if any, people outside Italy had heard of the disaster in Turin on the night of May 4th, 1949, when the Turin team’s plane crashed into the Basilica of Superga, Turin. The team were returning from a match in Lisbon with Benfica. The entire Turino team and some press reporters were killed when the plane crashed into the Basilica. At the time, the Turino team was called Grande Torino as they made up most of the Italian national team. Among the victims was the father of future international player and team captain of Italy, Sandro Mazzola.

The Turin crash is classed as CFIT (Controlled Flight Into Terrain) as the common theory is the pilot mistook his position as he lined up to land in Turin. The reports when the plane turned from Savona to head for Turin said the cloud coverage was almost at ground level, so the pilot had no way to judge his flight line other than to do what pilots are trained to do, but hate doing, relying on the instruments.

When judging people’s actions, people often forget that they are judging by the standards of today, not of those at the time of the incident. In this day of multi-million-pound contracts, people forget that it wasn’t until late in the ’60s that players were transferred for over a thousand pounds, and even the top players needed to prove their value. There was none of what we see today with million-pound players sitting on the bench.

Today’s players should take a leaf out of the book of Manchester City goalkeeper Bert Trautman who played over 75 minutes with a broken neck. True, he didn’t realize the severity of the injury, and there were no substitutes. Substitutes were not allowed until the end of the 1968 football season.

If I were a manager, I would be the same as Brian Clough, the greatest English manager never to manage England. I’d be tough on the players if I thought they were not doing what we paid them to do. I don’t care if you are Joe Smith or Jose Carrillo. If you do not play as well as I think you can, you won’t play.

Mr. Clough never got the job as England manager because the board wanted a “yes man,” which they got with Ron Greenwood who was at West Ham United at the time. True, his team had won the FA Cup, then the Cup Winners Cup, but at the time of his appointment WHU had spent over 15 seasons in what is now the Premier League fighting and avoiding relegation because other teams had performed worse than them.

To my mind, the 1966 World Cup could have been a set-up, I have no proof, of course, but certain things stick out to me.
First, with Brazil having won the previous two contests, if they had won in 1966, as they did four years later, they would have kept the trophy. However, the group they were could not have been more challenging considering the teams playing at the time.
England, on the other hand, could only have had a more comfortable opponent if you exchanged Uruguay for either Spain, Switzerland, or Chile.

I don’t think Brazil would have won the cup that year, even with Pelé. The grounds in Europe are not suited to what the Brazilians are used to playing on; they are thick with grass and demand a lot from the players. Brazilians and other South American teams are used to hard soil where the ball does the work. That is why I think England would not have won in 1970, even with Bobby Moore and Gordon Banks. As was proven in the 1968 Olympics, you can train at altitude for as long as you want, but unless you are used to the conditions, you can’t compete for long.

Ron Clarke almost died at the end of the 10,000 KM race as his heart stopped. This incident is one of the reasons given for his death as the strain was too much.

Most people blame goalkeeper Peter Bonetti for the German goal scored by Gerd Muller. Still, as a former keeper, I can tell you, he had no chance of stopping the goal. Once the winger passed full-back Keith Newton a goal was on the cards as the keeper had two men closing in on him, even Gordon Banks or the great Russian keeper Lev Yashin could not have stopped the goal.
The 1970 World Cup would be won by either Brazil or Uruguay, with an outside chance of Peru doing what North Korea did four years earlier by surprising the experts.

When I look at the team England took to Mexico, and I wonder why so many of them went. Some played in a team that won a trophy that year, Keith Newton was one of them, while others such as Francis Lee were not suited to the hot climate, and others such as Bobby Charlton were passed their best.

The bottom line is England would never have got to the final, in my opinion, as that series had some of the best teams seen from the countries until then, not only Brazil, who is seen as the team of all teams. If you look at the teams who performed well, one thing stands out; the team needs to be built with a core of players who play together at club level. It is possible to get a team that can up their game from 11 clubs, but it is challenging and needs extra training to get them to understand each other.