A Question for Mitt Romney and Newt Gingrich

I would like to ask Mitt Romney and Newt Gingrich a question. Up until now, the Republican Party has talked about fighting the deficit without tax increases.

Since 2008, they have also fought US health reform while the rest of us in world actually have a free universal healthcare system which is not the best, but it is still there. Almost nightly, they argue against abortion, contraception, and they have no plan for the future. At present, the media bombard the public with bad news from Europe. The Americans cannot afford to be the world’s policeman, but America can use their insight to help shape a future economy, not be a part of the problem. 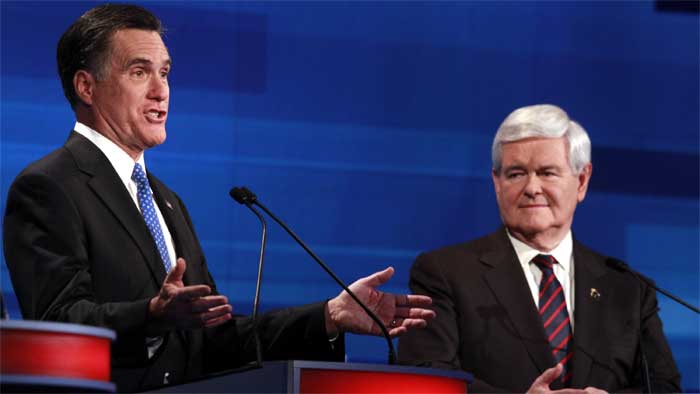 Believe it, or not, but I do have a Three-Point Plan for world economic renewal.
First Point) We are ten years away from a single world currency and one world laws—it’s globalism and we can’t fight it because that is the future period. The United States needs to take the other leading economies and have a truth and reconciliation committee to not only wrap up the American War on Terror but bring peace to the Middle East. Why? A lot of powerful people made fortunes with the American War on Terror, including now, and they need an arena to come clean with how they did it, otherwise they will fight the coming, one world currency and legal system. Why would they do that? A one world legal system would put them in the prisoner’s box in The Hague. Thus, such powerful individuals would do anything in their power to stop a one world currency and legal system.
Second Point) Only after the completion of a truth and reconciliation committee, every government in the free world should legislate a one world currency and legal system.
Third Point) After ten years, every nation state would have a window of opportunity where they can have a referendum to vote themselves out of the one world system, returning to their old currency. Call this plan The Commonwealth of Nations Plan. That all being said, I would like to know if Mitt Romney and Newt Gingrich would agree to this Three Point Plan. I will be waiting for their answer.
Continue Reading
CelebritiesHealthcareUnited NationsWellbeing
6
Share FacebookPinterestTwitterLinkedinReddItTumblrWhatsAppScoop ItMediumEmail

I Am Just a Drifter Soul

We Need a Fat Tax