This morning, having a quick cup of coffee and cake brought by an older patient, standing with my colleagues and the nurses, no time to sit down.

They were teasing me laughing loudly saying that it was surprising that we had happy patients who wanted to bring cakes. We often tease each other.

The next patient Mrs. Wesley walked into the room. Although she had had a very serious disease in the past, breast cancer 10 years ago, I have seen her only once or twice during the last five years. After five years with no metastases, she was considered cured. 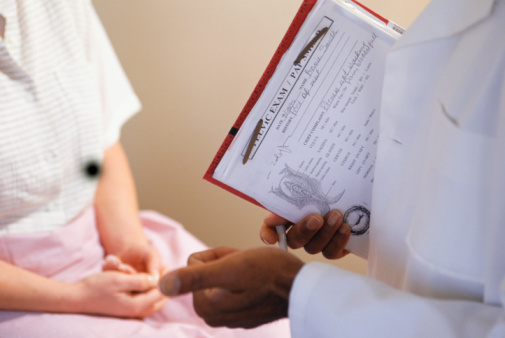 As at former times I had seen her, she made a brittle mental impression on me.

She told me that she had pains in her left leg. She had no symptoms of a hernia. After a physical examination, I thought it was probably “Ischia” which is an irritation of a nerve, which goes from the buttocks to the leg.

I gave her some painkillers and advised her to make an appointment with a physiotherapist.

If it would not get better I wanted to see her back at the clinic within a few days.

I carried on with a busy schedule, ten minutes per patient.

A few days later she came back. The pain was still the same.

After a physical examination, I gave her a letter for the neurologist in which I of course mentioned that she had a lumpectomy (breast cancer surgery) ten years earlier. She would make an appointment. I also gave her stronger painkillers. At the back of my mind, I was hoping that the pain is not caused by bone metastases.

A week later, Monday morning while opening my e-mails, before starting to see patients I saw that she had called the night clinic three times during last night.

The first time she said the painkillers did not help and she asked for something stronger. Later she called and said she was terribly nauseous from the painkillers and got tablets for nausea. At six-thirty in the morning, she called once again. She had extreme pain in her leg.

They told her since it was almost eight o’clock to call her own doctor at eight.

I told my assistant nurse that in case she calls, she can come this morning, I had one open slot left in the morning.

She indeed called. Later she arrived in a wheelchair with her husband. The pain persisted, actually, it was getting worse. The painkillers did not relieve the pain. She had seen the neurologist and had an appointment for an MRI six weeks later and a bone scan at the end of the week.

I did a physical examination and found the same symptoms only worse.

All together this gave me an uneasy feeling. I became anxious about her.

I picked up the phone and called the neurologist. Dr. Stephano remembered her. She found her very nervous “a little psychiatric” so very nervous she said. I said that it was probably because she was afraid it might be metastases.

She was surprised I wanted her to see Mrs. Wesley on the very same day and that I thought that the MRI should be much sooner. “Today would be best. “

She reacted a little sarcastic saying again that the patient was “a little psychiatric”. She said she would try to arrange it and call me later.

Ten minutes later she called me again and said the MRI will be in the afternoon and she will see Mrs. Wesley the next morning to tell her what the result of the MRI was.

The next morning Dr. Stephano called again. It was clear that the patient has metastases in the spine.

I felt so very sorry for Mrs. Wesley.

All names and places mentioned in this story are fictitious.