The Vulnerable Young Wolves and the Wise Owl

Willy and Billy were two young wolves that used to live with their mum. The mum was the only living creature they had known before they witnessed a huge bear preying upon her voraciously while she was trying to protect them. Unfortunately, their mom departed before teaching them the required hunting skills to satisfy their dietary needs and before roaming with them away from their den.

The two pups had an exciting life with their mum.  All they used to was play together, eagerly eat what she had brought home and bite each other out of joy. They had never bitten another living creature or shown aggressiveness towards each other. They had enjoyed a carefree life which the bear had suddenly terminated.
Willy and Billy were both of the same age and had shared lovely moments together, but alas, without their mother’s affection and protection their love for each other began to fade. Their aggressive behavior emerged like a shot and the need for food seemed to feed their violence towards one another. Their bites were no longer done in jest; they became a sign of tremendous anger and hostility as both could not help thinking of food. 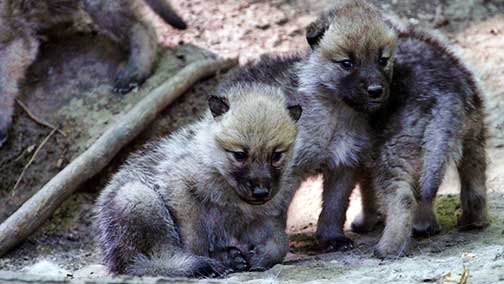 Days had passed since their mother’s death. The vulnerable, starving pups were getting thinner and thinner and were about to collapse from hunger. The extreme hunger compelled them to leave their shelter. As they had not known any other creature, they had to wander together. However, when hunger stroke intensively, they howled and bit each other fiercely. They had not uttered a single word till they spotted a carrion some yards ahead. They looked at each other with joy and seemed to regain their natural complexion. Willy was the first to speak his mind.
It’s our lucky day, bro.
Yeah! Mum is still watching us.
I am missing her so much.
So am I.
I’m missing food as well. Let’s go, Billy.
Being excited at the belief in their mother’s continued presence, the two pups regained strength and rushed to the carcass hoping to find enough flesh to feed on. To their amazement, they found a considerable amount of food. Without thinking about whose leftovers they could be, they started devouring the carrion. They had not sated their appetite till they gnawed at the bones.
After some time, the two pups raised their heads and belched simultaneously.  Billy turned around and said, “What a feast! Thank you mum.” Willy looked at him and asked dubiously, “Is mum really watching us?” Without hesitation, Billy confirmed.
I am not sure about that, Billy. I think mum has gone for good. It’s just luck and we are so lucky.
No, Willy! It’s mum. I feel it in my bones.
Mum is in our hearts. Now we depend on luck to have food.
Billy felt disappointed and urged his brother to go back to their den before dark. The two brothers walked clumsily as they had eaten too much. They reached their den after a long walk and as soon as they lay down, they fell asleep and did not rise until dawn.
They got up full of energy and high spirits and started playing as if they had never experienced hunger or felt hostility toward each other. They played and played with great joy. After some hours of playfulness, a distasteful feeling started to knock them sideways. Billy smiled and said, “I guess mum is calling us for dinner. Let’s go.” Willy smiled back and nodded. They retraced the route they took the day before. To their astonishment, they found nothing. They felt disappointed. They spent much time wandering in the area but in vain. No one dared to utter a word as both felt their hopes were dashed and hunger was about to overtake them. They went back to their shelter and hunger struck more fiercely. They lay in front of their den wondering what to do. Nothing could be heard except their groans. They hid their heads between their front legs and shut their eyes from the pain. Once they heard their stomachs, their heads lifted and their eyes shone in the moonlight.
Suddenly, they heard a flapping sound coming from above. They stood up, stretched their bodies backward and looked at the top of the opposite tree. They felt fear mixed with wonder. It was a large old owl. The two brothers came closer to each other and took a defensive stance.
The owl rotated his head, smiled and greeted them. The pups uttered no word but displayed extreme anger. The owl moved down to a lower branch and uttered, “Take it easy, guys! I am a friend and I came here to lend you a hand.”
The pups felt some relief and sat a bit more comfortably. After a moment of hesitation, Willy said, “We need food. How can you help us? It seems luck has let us down.”
The owl smiled and said:
Son,
Luck never happens luckily
It has a well-defined itinerary
To reach a target immediately
It may pass by you airily
And if you are a bit lucky
You can grab a puff so quickly
Otherwise, you will act solely
“But mister, we are too young and we are alone. We can’t hunt,” said Billy. “Stop lamenting brave wolves,” responded the owl. The owl came closer and said:
Ups and downs nurture life
Patience and endurance help you survive
Never know when life can supply or deprive
Jumping into despair is a futile dive
Why not refrain and derive?
Seek your potentials to contrive
Appropriate ways to strive
Against balks all along your drive
Never lose hope, but thrive
The two pups looked at the owl with great relief and confidence. Their eyes smiled as if they saw a treasure. They asked the owl to give them more from his wisdom. The owl looked satisfied and got ready to fly away. He opened his wings and said, “Remember! Nobody will help you but yourselves.” Those were the last words the wolves heard from the owl.
Continue Reading
Creative WritingFiction
4
Share FacebookPinterestTwitterLinkedinReddItTumblrWhatsAppScoop ItMediumEmail

Jill Shure Feb 16, 2016 0
What Inspires You? I believe there's a universal mind that writers tap into when they create a novel or…
Publishing