Our old Buick traveled the same path, in front of St. Anthony’s Church, left, on Seward Place, we now were close to Jay Street known as the Italian district of our city.

Not quite South Schenectady but a different world than what we had on Avenue A.  To a child it was a world filled with red, white, and green –  resembling the Italian flag.

On Jay Street, we ate spaghetti and meatballs; I counted the squares on a red and white checkered tablecloth.

Window coverings matched with white and red squares. Little Italian flags stood attached a small sticks next to a register – where daddy received his change and I received an Italian flag from a fat lady; always the same lady who took the money; she never changed.

Yes, I noticed everything on Jay Street. 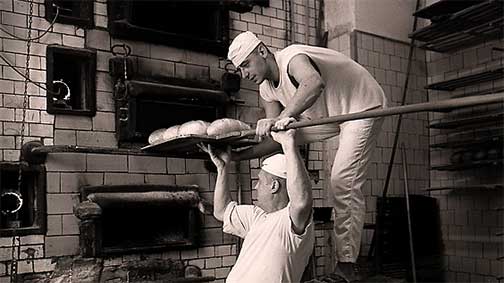 As a child my eyes were wide open, my mind was clear and ready to be filled with imagination. I remember mother, sitting near the window, at the restaurant with her Chesterfields, a black plastic ashtray and a silver lighter especially engraved with her initials; after dinner she would light up.

I would wonder why the world was filled with smoke, especially in little Italy. When smoke rings filtered through the air from giant cigars, pipes, and ovens which were part of the restaurant.  I began twisting and turning the salt and pepper shaker; white glass and a silver twist top – I wanted to switch the pepper with the salt, but I didn’t have time.

I touched the fake red flowers on the table, those where mother’s smoke landed; they were always dusty.

We tried to eat at the same table and I always heard people speaking in Italian.

I knew those who spoke in Italian were speaking about us, because we didn’t understand. It was one of those times we were not supposed to hear what was being said.

Friendly, yes – Italians seem to smile or pray a lot and play the accordion – my father always smiled even if he only understood broken English.

Father knew everyone on Jay Street, and he shook everyone’s hand. Italian men kissed from ear to ear unlike Americans. Most of all I recall having dinner at any of the joints on Jay Street and told to be on our best behavior.

The restaurant owner treated their establishment like being at St. Anthony’s Church, and mother, she dressed up for the event, father wore suit, and I wore black patent leather shoes.

My brother he wore a suit too, with the bow tie.

This small community of Italians took over Jay Street; several bakeries stood across from one another comparing patrons, yet, proprietors seldom spoke. The big thing the parking lot which separated their establishment from one another.

One small bakery had a brick façade, Windows displaying artificial wedding cakes but after years of sunlight, when I went to choose my cake, all the white frosting turned yellow, and on the top, the same bride and groom, I noticed when I was five.

Not much inside that old bakery – one glass cabinet with cookies made on Sunday. On Friday, in the summer, local people lined the street holding small cups of lemon ice.

Many stores along Jay Street had things to sell, but limited to what was there to stare at and these tiny stores, eateries, had backrooms with closed doors.

I often wondered what made lemon ice, Italian?

Lemon cookies were Italian too, and I wondered why lemon was so popular for Italians.

Around the corner – a diner stood where homemade food was cooked behind the counter and open from early morning until five.

I heard the owner was a good Italian cook from a respectable family and their home fries were to die for, and their bacon, the best in town.

When you opened up the door everyone turned to stare, some people smiled, others waved, but most of them talked loudly, even if they were sitting side by side.  The clanging of the plates, and the cook shouting, “Order up.”

All heads turned your way and people waved.

I noticed many studying a single sheet of paper, leaning on their elbows.

My father knew everyone, and shook hands, squeezed shoulders, thanked strangers for things he never remembered.  He told me, “It is best to be nice to everyone.”

On Jay Street you would find two Italian bread companies divided by a parking lot and the owners never did get along, never smiled, waved, all they did was argue about some parking spaces.

One bread company used the colors of the Italian flag, for bags. One person stood behind the counter and asked, “Long or round?”

There was always a long line at lunchtime.

They had this reputation of not liking their neighbor, but I still will never know who was right or wrong.

One thing you had to know about the bread wrapped like the Italian flag – you had to eat it that same day.

By day two it was a loaf of bread but felt like brick.

In our house, it was used for dunking into grandmothers homemade cocoa. If she still had leftovers, she covered the bread with water and fed it to the black birds.

She called, “birds, birds,” and they came…

The other baker on the other side of the parking lot, made pizza without cheese, and one size of Italian bread. There was this long hallway in the front, near wide open spaces where trucks must have parked.

Today you’d find another place along the Street, yes another Italian restaurant that continues to draw people to the city, no longer are they all Italian, and restaurants gave up giving away Italian flags. Things may have changed but memories remain the same – the man who stood behind the counter, then rested on his porch, could give the meanest look if you stepped over his property.

I can see him in heaven looking down on Jay Street, wondering who’s moving in, who is sitting in his place on his cement steps. He is probably still counting flags on those bread bags.

One Peg of Anguish