Mad Cow disease! SARS in Canada! I saw something boarding on the bizarre in 2003. It was so absurd, I actually sent it to Mad Magazine, but they did not give me an answer. I suppose you got to know somebody at Mad Magazine to get anything in their door!

Anyhoot the story goes like this. A drunk walked out of the HardRock Cafe on Dundas Street in Toronto. He collapses on a park bench in Dundas Street Square. 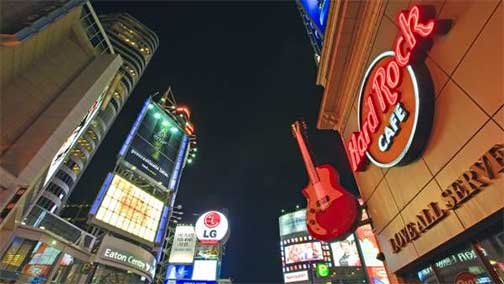 Two Eaton Center security guards come by, produce SARS masks and stand over unconscious man, and don’t go near him. Within spitting distance is the HardRock Café, which at that time contained a built-in radio station, called Q107. Psycadelic Sunday Host, Andy Frost, goes out to inform security guards that the unconscious man is his regular drinking buddy, not a SARS victim, but security still don’t go near the drunk.

Even the HardRock Cafe manager goes to convey that the heap on the bench is a regular, not a SARS victim, but still the security staff does nothing. Twenty minutes later, a cop comes, whips out his SARS mask, and blue gloves, and waits. Again the dj Andy Frost and the restaurant manager come out to inform constable that the unconscious man in question does not have SARS but is a regular in restaurant. This induces the blue glove clad Cop to start searching victim for identification.

Meanwhile, a fire engine screams down the street; fire men produce SARS masks, and stare at unconscious man. HardRock Cafe manager and the radio personality again come from the hub and plead with emergency response team that this unconscious man is not a SARS victim, but a regular customer who does this all the time!

Finally, an ambulance beams right out of nowhere, backs up on strange scene, two space age doctors complete with blue Level 4 Biological Suites, goggles, and surgical cloves come out of rear of craft. They toss drunk onto stretcher and into the rear of ambulance and drive him off for containment. The gloved one does his report, Security Guards do their report, and fire men do a dumbie check, and everyone on the pay role for the Canadian government leaves. In a few minutes, everyone is gone and the world is sane again! And it was a sunny day. And that was my first trip to the HardRock Cafe.

From the Depths of my Soul