And in the Forest Singing: Amongst the flowers and the trees lives a world unseen in the half-blind eyes of men.

Once upon a time, there were roses, the bowers overflowed, and amongst the reds and whites, the opulence of green, there was the tiniest of creatures. 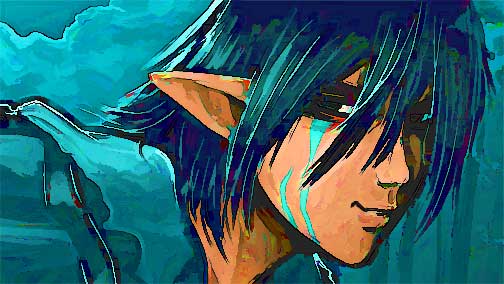 It was a Mari bug, and she lay happily letting the warmth of the sun heat her iridescent back. Suddenly she felt a splash of cool, the surprise of dew as it slid down, over her, under her.

She blinked her giant eyes and looked up and down and all around. There, sitting on a leaf, was that troublesome elf Carag.
“Are you the one who has left me all wet?” she asked.

Carag smiled his silliest of smiles, a smile all eyes and wild-haired, misfortune and delicate madness.

“I take the blame, my little bug, for I am full of trouble, but join me now and run away, and we will burst the bubble!”

Mari bug wiggled her body, and beads of dew, trapped diamonds upon her back danced and slid.

“Oh Carag, you know I watch over the flowers, paint the hues for sunlight’s kiss, bend leaf and draw the waters. Were I to run off, who would do these things?”

The elf, his mischief drawn like a scarf about his head, took off his shoes to count his toes. He had, on many an occasion, decided their numbers changed. Satisfied that all was good, he slid forward until he rested in her shadow.

“My Mari bug, my little pet, I want to see you smile, so run with me and dance with me, if only for a while. These leaves and plants, these holy things that rest within this bower, can take a sudden silent place within my loves tall tower.”

So Mari Bug smiled at her friend, and, opening her wings, she trapped the essence of wind, the thought of the azure deep, and she leaped skyward. A great loop, a fluttering of hearts and smiles and songs, and then back so he could climb upon her.

The forest, her deep and lush seduction, her brilliance and her shadows wrapped about their bodies, hid their smiles so, known only to themselves, joy burned brightly. They hid from the world, from the sorrows, and in their hiding, they found some small sacred truths.

When the light faded, when the petals had sung their songs and the trees finished their dancing, the two returned to their green. Settled amongst the reds and blues, the deepest shades and delicacies of the hue, they pulled a blanket of laughter about themselves and sung themselves to sleep.

“And Mari Lamb is gently sleeping, the great big world is hardly peeping, and still I sit here silently,” whispered the little elf Carag from the end of her bed.

He was quite tired himself having spent the dark hours gathering flowers and chasing away moths. “None shall wake my Mari Lamb in her so gentle slumbers, for she does sigh, and she does rest from counting lamby numbers.”

Tiptoeing to the headboard, he gazed at her, tears welling in his little elf eyes. “So many years that I have lived and was not till today, that angels landed here on earth and one’s not flown away. So sleep you now, my gentle child, and know that I am keeping, a guarded watch, a ready eye that none disturb your sleeping.”

The darkness faded to light, as it must, as it should. Carag kept his vigil, occasionally turning up bedclothes, tucking in errant toes that found the coolness beyond the sheets. It was labor he did not mind, one in fact he took great pleasure in.

As the first rays began to hint their cheerful glow across the horizon, he took to braiding daisies and buttercups in her hair. Gentle were his ministrations, careful were his fingers that nary a knot would be found nor a strand roughly pulled.

She sighed deeply, twice, and then her eyes gently fluttered open. Carag returned to the foot of the bed and sat, trying to hide his joy.

“Good morning elf-friend, have you been here all night again?” she asked, her voice like the songs that faeries sing.

“Good morning to you, my Mari Lamb, and are you now well-rested? I have watched you all the night, and dare not I be bested.”

“I slept so wonderful and warm, safe, knowing that you, my friend, were here, but why? You must want your own slumber; you must need your rest as all things do.”

The little elf scurried off for a moment before returning with tea and crumpets. He had faeries make them while she slept, and they were warmed by fires magical and ancient. Placing the tray upon her bed, he fussed and fumbled until she was up and ready to eat. She kissed him gently upon the forehead and smiled.

“I did not sleep all the night, my elf, my friend. In fact, I woke once to hear you singing.”

Carag’s face fell at the thought his nocturnal serenades had disturbed her; before he could say anything, she continued.

“Say nothing else but sing to me your reasons again, as you sang them last night.”

He could not refuse her; he dared not, so even now, his secret exposed, he drew his breath deeply and sang to her.

“Oh, Mari Lamb, my secret love my hearts forever beating,
to be near you and sing to you these hours are so fleeting.
You see me here, an ancient elf, but I have been much more,
as warrior and chieftain proud I’ve stood upon the floor.
I was a poet once you see, a salmon in the river,
a bear on the frigid arctic plain where Norsemen dare not shiver.
But here I am alone and old, my flesh still strongly yearning
to be the man that I was once and for your love be earning.”

Mari Lamb sat up on the bed, she extended her arms and beckoned this strange man forward. He moved with the hesitancy of the kitten before he was near enough for her to grasp him.

“Oh, silly elf and once-proud king, your words do cause such wonder that my fair heart does tremble, so it sounds to me like thunder. So I will try my hand at rhyme and in your magic keeping, that words of love are best sung loud and not just while I’m sleeping.”

Alan Place Aug 7, 2015 2
Cross Genre Writing For many writers, the changing of the genre can be a potential death verdict. I read the…
Writing