What’s it to you? You’re a piece of software running on a machine, a record of random keystrokes and digital images that people submit in an attempt to be my friend. What’s wrong with friendship where you sit and chat over a cup of tea or help fix a car? Is the screen replacing experiencing life for oneself?

You can’t smell the salty ocean from watching a YouTube clip of someone surfing, nor feel the breeze cooling your skin after an invigorating walk up a tree-lined path. You can’t taste that gorgeous picture of a chocolate mud cake with icing that would dissolve like snowflakes on your tongue.

But, by chance, the computer screen did bring us a new friend to replace a lost one. Not a Facebook friend. A real friend. A dog. 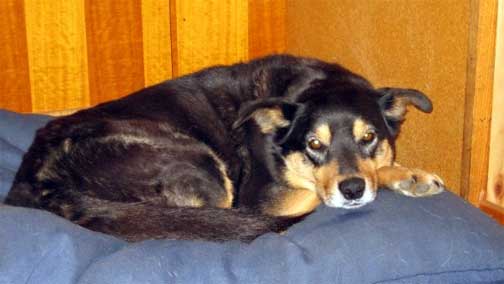 The friendship of a dog doesn’t need an electronic intermediary. A dog doesn’t care how many ‘hits’ your page gets; how often you throw the stick or ball is far more important. A dog doesn’t feel the need to check a gadget every few minutes to see who’s eating what or snapping photos of themselves.

A dog doesn’t ‘unfriend’ you. Even when they die. They stay in your heart, memories triggered every time you see their favourite toy, or where they loved to walk; the fluff that never seems to go away under the furniture no matter how many times you vacuum; reminders at all the towns we visited where butchers gave him bones or the motel manager let him sleep on the verandah in front of our room.

Doc came to us as a reject, advertised on a bulletin board at work as ‘free to good home or will be shot’. A six month old German Shepherd-cross, bred to work sheep; except he was afraid of sheep. Oh, he was brave enough to run alongside in his Kelpie slink when a fence safely separated him from the woolly beasts, but get to the open gate… gone!

His first real brush with death came the day before we were about to depart for a six week trip overseas. We had laid baits around the farm sheds and he must have consumed a poisoned mouse. We left him on a drip at the vet’s, heartbroken that he wouldn’t be there on our return. Fortunately the early treatment worked. After that we trapped the mice. As a treat, I gave the first victim to Doc. He carefully removed the tiny body from his dinner bowl, nuzzling and licking the corpse as if trying to revive it. I never offered him another one. He didn’t have it in him to be a predator.

Doc was only ever responsible for the deaths of three animals that I knew of. Not deliberately. Not chasing down and snatching with bared teeth and a growl. The first was a turkey. Doc had gone to stay for a few days with neighbours who fattened fowl for Christmas. Apparently he sat and watched one large gobbler for three days. It daren’t move despite being within the safety of its enclosure, finally succumbing to its fate through thirst.

The second creature to meet its demise was a rabbit. Doc always wanted to play with anyone he encountered, happy to share his stick or ball, bouncing up with a wagging tail. The rabbit bolted and collapsed, presumably from shock. Doc carried the lifeless body under his favourite tree and slept with the skin for years, his cuddle bunny.

A black wallaby met a similar fate. Not understanding that Doc merely wanted to play tag, (he didn’t care about the branches being ripped from the struggling fruit trees in the drought), the wallaby leapt off in such a hurry to leave the orchard that it hit the gate and broke its neck.

Chasing tennis balls was surely a safer pursuit, until his right cruciate ligament snapped when he was nine years old. Three weeks later the other one also severed and rendered him immobile. He’d try to drag his once strong body along behind his front legs, confusion in his eyes. The vet examined him, saying he’d need ‘the big needle’ and to take him to the surgery the next day.

That night, a large gathering of friends came to say goodbye. Doc was loved by everyone in the valley; he was a familiar sight trotting beside my horse when I went riding. We carried him into the surgery, tears streaming down my face. “What’s the matter?, the vet asked. His look of horror when he realised my misunderstanding will forever remain imprinted on my mind. “Not THAT needle!”, he exclaimed. He meant he could give a cortisone injection into the joints to help repair the damage.

Six months later, Doc was running around, albeit with an odd swagger. By this time we were working on a cattle station in Far North Queensland. It was a good life, just us and Doc out in the four-wheel-drive all day. We worked the fence lines—fixing breaks, chopping down or spraying destructive trees, and replacing droppers. Doc loved to ride on the back of the ute. It could be a tight squeeze with rolls of wire, star pickets and the two hundred litre chemical tank, but he’d stand with his ears blowing in the breeze, tongue lolling, enjoying the rare coolness provided by movement. He couldn’t enjoy his love of swimming due to the saltwater crocodiles.

One day, we stopped to open a gate. No dog on the back. Looking down the track, we spotted Doc sitting at the roadside, unmoving. He must have jumped or fallen from the ute when the equipment moved as we had traversed a rough corner. He didn’t come when called. On returning to where he sat, we discovered his left hind leg stuck out at an angle.

The head stockman agreed that the leg was probably broken. We rang the vet and agreed to travel the ten hours to the surgery. Propping Doc up on a mountain of pillows in the back of our car, we drove to town. Not a single whimper emitted from his velvet muzzle. An x-ray showed that he had dislocated his leg. He must have been in enormous pain. As we lived so far from help, the vet suggested that he remove the hip joint completely rather than try to repair the damage with wire.

Once more Doc had to learn to walk but could no longer jump. He developed a wobbly gait, plus a passion for a toy tyre that he’d chase endlessly around the house, throwing it in the air and pouncing as it rolled away. As time passed, he stopped watching the kangaroos that crossed the track in front of the ute. Eventually not even the sound of his dinner bowl made him lumber to the back door. By the age of sixteen he’d do his daily rounds of the garden by smell alone, following the fence lines as he had in our days back on the station, but that squeaky tyre went with him everywhere.

After a visit to friends in the sub-tropics, an unseen tick took residence under his thick coat. We thought his staggering was his usual inability to walk until his hind end locked in paralysis. That trip to the vet turned out to be his final one. Despite hope from the intravenous serum, he passed away in the night, his once mighty heart stopped.

Two years after we laid his body to rest in our garden, on his comfy bed with his squeaky tyre, we started to talk about possibly getting another dog.  We agreed it would have to be another Shepherd-derivative. We didn’t want a puppy, preferring something already housetrained; obedient; gentle. A male, too. We knew it would be hard, if not impossible, to find one that matched our exacting requirements. We decided to start looking in a few months’ time.

And then by chance I was sitting at the laptop to check the weather when Facebook popped up with a photo of a rescue dog in far off America. The soft eyes brought back many memories. Unable to help myself, I typed in a search for our nearest RSPCA—a face looked out at me.

I clicked on the image. ‘Calvin, German Shepherd cross, sixteen months old de-sexed male. No vices.’ I called the contact number. He’d been found wandering and the owners couldn’t pay for his release from the pound. The staff couldn’t understand why no-one had shown an interest in him for four months; he was an obedient, gentle soul. He loved sticks and swimming.

I am once again at my computer. “What are you up to?” asks Facebook. I answer “About to take Calvin, our wonderful new friend and family member, for a walk.”

melaniesovann94 Mar 27, 2020 1
Writing in Quarantine To some people, writing is probably a community thing. They like it when they sit around…
Book Review