Dear Diary,
This is a story I never told anyone. It’s one that I don’t like to think about, I’d rather believe it was just a dream.

It happened when I was 9, maybe 10 years old. Even now, out of college and with a job, a “normal” life, I don’t find the idea of recounting this tale appealing, but I received an invitation to a party for this person… A party at the house where the story takes place.

Let me explain in more detail.

Like I said, I’ve never enjoyed recalling the memory; in fact I actively fought against retaining it, and in the days, weeks, months after it happened I tried to bury it, hoping to seal it up in a vault in the back of my mind. Sometimes it seems like I’ve succeeded, a few days will pass and it won’t so much as cross my mind, but it always comes back and it’s always as clear as day. 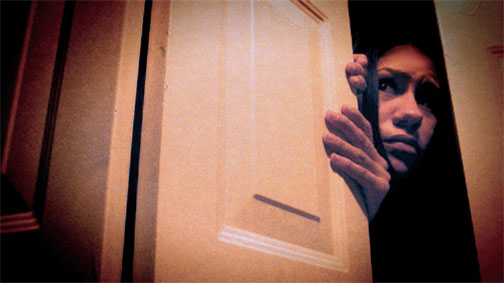 What happened was this:
I was at a birthday party. I remember that my whole class was there, it must’ve been 3rd grade. Our teacher was there too and many parents, though not my own. I’d been dropped before they headed off for some unknown destination. I didn’t care. I was just excited for cake and ice cream and anyway it was kind of cool to be unaccompanied.

So the party was just getting started when someone suggested we play a game. It was popular at the time, a test of endurance. You closed yourself in a closet and stayed there for as long as you could stand it. Whoever remained the longest was the winner of bragging rights for the rest of the party. Easy enough, but when you’re nine and hear all your friends joking and laughing you want to join in too. No one lasted more than five minutes and then it was my turn.

Like everyone else before me I stepped into the bare, small square of a room (it’d been cleared of coats by the mother of the birthday girl) and shut the door.

I sat on the floor, back to the wall, and listened to the sounds of the party.

I remember feeling a little cold, the party was in the basement, and thinking about how I’d suggest we go outside once the presents had been opened. It’d been raining, but I figured that it would have stopped by then. Just about everyone had come in rain boots. We could puddle jump and squish worms.

As these innocent thoughts of merriment rolled through my mind I began to notice that the noise from outside the closet had grown softer. Instead of loud, rambunctious laughter, I listened to what I thought were the same general sounds, but softer, as if I was hearing them was beneath a thick blanket. Muted.

I wondered if I was falling asleep, but didn’t think so. I wasn’t tired or bored enough for that.

My eyes dropped to the thin shaft of light, cast by a ceiling lamp that came under the door, only to realize that it was not nearly as bright as it had been before. What was once an orange tinged glow had become a whitish-blue beam.

Someone’s playing a prank, I thought. I’ve been in here the longest so they’re trying to get me to come out.

By this time the sounds from the party had practically faded into nothing. I slowed by breathing, quieting myself in an attempt to hear voices, music or anything at all, but I was startled to realize that I couldn’t hear anything. Nothing at all.

That was when I realized that I’d never before experienced true silence. At night there were crickets, cars in the distance. We were quiet when we took a test, but there was the scribbling of pencils and huffs when an answer turned out to be wrong. I’d thought I would hear someone cough, sniffle or maybe there would be repressed laughter, but there wasn’t. This silence was deafening. So silent that it was almost painful.

I pushed myself off the floor and gripped the cold metal knob, turning until it *clicked* and pushed open the door.

The sight that greeted me was unimaginable.

Everybody was there, I saw my teacher, my friends and their parents in various stages of activity. Some by the buffet, some holding plates and sitting on the couch, others had been dancing.

Now they were frozen. Unmoving. Motionless.

Not only that, but they looked different.

Listen, when I say “different” I really mean it. I mean that instead of standing around looking normal, solid and colored in various shades, they flickered. Wavered. Yes, that’s what I mean. They looked like a television channel that had bad reception and wasn’t coming in clearly. They were grayish in color, statics.

I don’t know how long I stood there staring at the scene, but eventually my feet pulled me forward. I moved toward them, walked around them, examined them from all angles, telling myself that I was dreaming.

I never touched them, afraid of what might happen if I did, but when I backed away I knocked into the buffet table.

The only part of me that touched it with any force was my hand, but that was enough for me to realize that things in this place weren’t as solid as they should be. The once hard wood surface of the table was soft, malleable even. Experimentally I pushed into it with my index finger. Sure enough it left an indent.

That was when I transitioned from morbidly curious to genuinely terrified. I stumbled toward the staircase and put my foot on the bottom step only to pass right through it.

Questions began running through my mind. What had happened? Where was I? Would I be tapped here forever, doomed to die alone? Would they return to normal sometime only to find my rotting corpse, never to learn how it had happened?

In sudden desperation I returned to the closet, slamming the door behind me and sinking to the floor. My eyes ran dry and my legs cramped, but I couldn’t find the will to so much as shift position.

After what felt like hours I fell to sleep.

The next time I woke I was in a hospital room.

I learned that after hiding out for half-an-hour, and being declared the winner, the party guests had told me I could leave the closet. They grew concerned when I didn’t respond, took the initiative to open the door and found me unconscious, gaunt with a fever and dry, chapped lips.

An ambulance was called, I was immediately placed on an IV drip and rushed to the hospital.

According to the attending physician I’d become extremely dehydrated, that it seemed as if I’d gone two, possibly three days with nothing to drink. Of course that was impossible. It wouldn’t have been long, he quietly told my parents when they thought I was asleep, before I passed away entirely.

There was an investigation, but as I claimed that no one had done me harm and no evidence was found to the contrary it soon ended without reaching any conclusions.

Even now, with a decade between myself and the incident, it haunts me. I can remember it so vividly, the white-blue glimmer beneath the door, the flickering figures of my friends…That deafening silence.

It wasn’t a dream, I know it wasn’t, yet I find that I feel compelled to answer the invitation.

So, Diary, if I don’t come back this time at least I’ll have written it down.

Early twenties and currently unemployed I've decided to broaden the scope of my search. I've been writing for my whole life, though mostly fanfictions, and received positive feedback from users of the site.