Life is amazing and what it holds for us is often unpredictable, sometimes unexpected but extremely precious. It is the hope of every woman to have a child to love, nurture and create in her own image or fashion.

Children are unique and each has their own special talents, which they present, to the world each day. But, what is you could create, produce and experience the birth of your own child not within yourself but in a surreal or unique way? What if as a child you invented in your own mind where children come from and how they are born? What if you thought that a special seed was planted in a garden that was watered, cared for and nurtured and eventually your child blossomed and bloomed from this one precious seed? 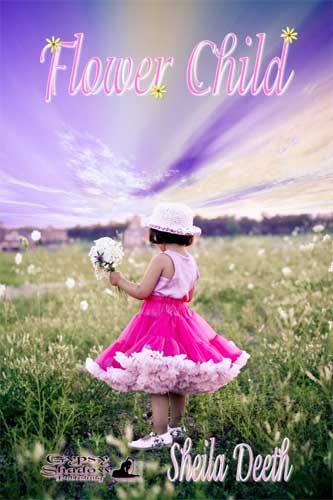 Entering the garden you could lift this little person put him/her in your arms and bring the child home to savior the moment and love you felt the moment you touched this special person. Your heart filled with joy and love and your hopes for this child loaded with expectations what would happen if it were all a dream and not a reality? What is you had a child that did not come into this world? What if your child was just not meant to be? What if your world became consumed with fear, despair and your reality a nightmare, a dream of what could have been?

You would be what was created and so vividly described by author Sheila Deeth in her short but inspirational yet thought provoking book Flower Child. Just where is Angela and what place does she hold in Megan’s heart? Learn more as you read my review of this outstanding, well written and definitely quite unique book Flower Child.

Megan’s world became a nightmare filled with red images, voices that she heard, songs that were song to her and heroes that would safe her from harm. Living in between a red and green world Megan’s reality became something of her own invention.

Describing quite graphically yet beautifully the loss of her child, her emotions what it did to her body and mind author Sheila Deeth takes the reader inside the heart and soul of a woman who longed to be a mom and what happens when that dream is shattered and another dimension takes over. Reliving the moment in her mind and then in the present with her husband, her reactions are so real and her feelings will haunt the reader and break your heart. Blame: when things go wrong we often point the figure at others or in this case Megan did at herself. Thinking she was the primary cause of losing her precious baby.

Do you believe in small miracles? Do you believe in angels? Megan is blessed with a visit from a precious angel, her very own named Angela whose voice you hear throughout the book as she is telling the story, describing what is happening and helping Megan, her mom whom she will never really know, understand the process of life, death and the amazing birth of her son, Daniel. Imagine going into a garden filled with children dressed in flowers, covered in many different colors with a green cord coming out of them since they were never born. Imagine feeling that sense of love, warmth and elation as you see the hopeful faces of these children hoping to be born and placed into the waiting arms of loving parents. But, for many this will not happen and for Angela she is part of Megan’s dream world as she comes face to face with one tragedy and hopefully front and center with the life of another inside of her.

Sheila Deeth has created a story about a beautiful Angel named Angela who is in the heart and dreams of Megan.  Angela is beautiful, has human qualities and wants to be recognized by her own mother even in her own dreams. Megan thinks she sees Angela and her husband David does not believe all that she says and does. Daniel has just been born and the author takes us on a journey from the time he is born, Angela’s evolution and growth and what happens when she strays, deals with the serpent that Adam and Eve dealt with and the end result of what happens to one of her friends an Angel. Eric her best angel friend disappears when he finally becomes an Angel.

Can you imagine in your mind and heart how you wanted your life to be, pretend to live and then realize what your life really is? In her heart Megan wanted to have Angela in her life forever. In her mind she began seeing her in her room, imagining her growing up and visualizing her at every stage of her life. Angela did the same as she envisioned herself married, finding someone to love and care for her, even if he was an Angel and learning many of life’s lessons along the way. Meeting Carmelita and the other nameless angels that finally found some identity when she and Megan entered the garden in her dream and named them would change the course of Angela’s perceptions in a great way.

As Adam and Eve were tempted to eat the fruit on the tree and were banished from the Garden of Eden what happens to Carmelita will definitely help you understand why some things never change. But, when Angela meets Elisha things change for her and she begins to feel like a real young lady, experiences the same things most girls do when they fall in love, but learns a hard lesson when she does not follow the right path.

So many lost Angels that needed to find love and a home, so many that just wanted and wished to be born. A beautiful garden filled with flowers, where souls grow and some die, an ending that you will never forget, which will definitely make you think.

What happens when Angela learns that her younger brother needs her to help keep him alive? Why doesn’t her guardian angel appear to really care about her? What will happen to her and Elisha? Will she be able to save her brother or will the cord that binds her keep her away? Welcome to a special garden filled with flowers, unborn children some who will live and others who just might become your special Angel.

A story so well told filled with hope, love, understanding and the fears and joys of one young angel named Angela, her mother Megan whose voice is heard throughout and whose heart is broken when losing her girl. Welcome to a beautiful garden where unborn children play and some just might be yours one day. Sheila Deeth teaches the reader many important lessons. Love is something we must earn. Life is precious and children are our hope for the future. One short 54-page book. One huge message to everyone.

Is There Such a Thing as Equality of Value?