’41’ is about a team of mercenaries hired to find a researcher/scientist. The setting is 41 years after an apocalyptic event”, says Bob Frantz, 96x radio personality and creator/ writer of ’41’. 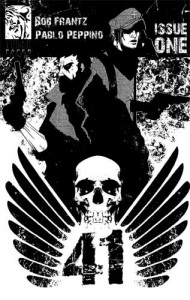 Imagine if the common comic collector was Marty McFly, then Frantz would be the white haired mad scientist Doctor Emmet Brown. In consequence, Frantz’s cartoon comprised contribution called “41”, would undoubtedly be his handcrafted hovering DeLorean/tricked-out two-seater time-machine. So before Biff calls you ‘chicken’, start flipping those pages until you hit 88mph activating the 1.21 Jiggawatt powered Flux Compositor shooting you through a wormhole-like-vortex; Bending space and light before landing in the post- apocalyptic war zone composed of grey ash and black rubble somewhere in the year 2041 leaving flaming tire skid marks behind in your wake.

Comic books of this caliber can be counted on the one hand of a clumsy woodshop teacher. Finding a better comic is as hopeless as Stevie Wonder trying to Parallel Park! 41’s story line is so addicting that the local rehab clinics have replaced doses of methadone prescriptions with pages torn from next month’s upcoming issue. The audience demographic is wider than Jared’s waist line before the Subway Diet; remember when he was so huge they used the Hubble for his annual colonoscopy? But I digress…

What number was Mozart’s final symphony? 41. What number president was George W. Bush? 41. And what’s the title of the comic you should buy today? 41! It can be purchased in person at Comic Kings, online with PayPal, and probably even iHop because they’re selling like hotcakes leaving bookshelves emptier than Sarah Palin’s internal monologue during a game of Trivial Pursuit! So keep your finger on the pulse of comic culture by picking up your issue today!