When I picked up Cormac McCarthy’s The Road I didn’t really look at the “#1 National Bestseller” on the cover.  Heck, it seems like all the books on the shelf at Wal-Mart say that, or some similar claim.  And I didn’t even notice the “Winner of the Pulitzer Prize” blurb beneath the author’s name.

I had no idea who Cormac McCarthy was.  I’d never even heard of McCarthy.  These last years as a stay-at-home mom, I was pretty much shut off from anything happening in that big world outside that wasn’t preschool or princesses.

It was the book cover that caught my eye.

I picked up the book, looked at the cover, read the blurb on the back, and put it back on the shelf.

Yep, that was the end of The Road for me.

Ok, so it wasn’t.  The cover interested me, but I was feeling a bit wish- washy on what kind of book I thought I’d feel like reading.  Actually, it was more of a monsoon of wishy-washiness. 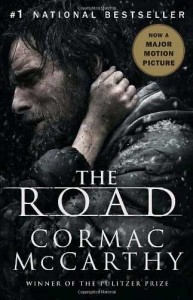 I looked over the shelves, which seemed to be mostly copies of Stephenie Meyer’s Twilight books and a large assortment of other romance novels with little else to chose from.  I even briefly wondered if Wal-Mart had stopped carrying much other than the romance genre.  This was probably a good thing, since it made my choice easier.  I’m not very fond of the romance genre.

I picked up another book, flipped through the pages, read the back cover, and put it back.

I picked up The Road again, looked at the cover, read the back again, flipped a few pages, and yes put it back again.  I just couldn’t decide what kind of story I wanted to read.

I bought The Road mainly because of the book cover, as sad as that is.  And the cover really is sad too.

The Road is a story without words.  This book is seriously lacking in words in a big way, but it isn’t in a bad way.  McCarthy did what I had always thought was unheard of before reading this book.  I wondered, while I read the book, how this author managed to find a publisher who would even touch a book without all those missing words.  McCarthy left out all the he said/she said, and how they said it.  I’m pretty sure that wasn’t the wind moaning outside my window when I read the book.  That was all the grade school teachers rolling over in their graves over this blatant disregard for proper sentence structure, grammar, and whatever other rules of proper writing have been completely ignored.

This book is also lacking a great deal in dialogue.  Things are happening, the characters are going about their business doing things, and there isn’t a whole lot of talking going on.

Sometimes talking isn’t necessary and what these characters were going through seemed to be one of those times.

Without all the he said/she said and descriptions, you would be completely lost and confused about who said what and how you should feel about it.  I read that in a comment online somewhere (I can’t remember offhand where).  I probably should have read that before I read the book, because I didn’t even notice all that stuff was missing until I was well into the book.

I burned through this book quickly.  It was one of few books that actually managed to suck me in and grip me throughout the whole book after reading so many books over the years.  It was an easy read and an interesting read, and without the extra he said/she said words the story had a feeling of added urgency even without the fast action urgency usually calls for.  It wasn’t that kind of urgency; it was one of desperation over a long period of time.

The Man is, of course, a man.  And that’s all we need to know about him.  He doesn’t have a name.  He doesn’t need a name.  At first I wasn’t even sure what kind of relationship the man has to the boy.  The Man’s main goal is to keep him and the boy alive.  Somehow, he thinks travelling across the country to the coast will accomplish this goal.  Sounds like vain hope to me.  But in a world that has been destroyed, where people have turned into cannibalistic savages for survival and food is almost nonexistent, even the smallest breath of hope is still hope.  Without hope there is no reason to try.

The Boy, another nameless character, is a frightened young boy who is completely dependent on the man for survival.  Without the man, he’d have already been dead.  But for a boy living such a terrifying life with no future and little hope, he’s a brave and surprisingly calm little boy.

The pair faces the threat of starvation and of running into other people every day.  Desperate times don’t always call for desperate measures, but they do bring out the worst in mankind.  Knowing what kind of monsters are out there, the man had a backup plan for the boy’s protection if anything happened to him.  To make matters worse, The Man is sick.  Very sick.  What will happen to the boy if The Man doesn’t get better?  I know, but I’m not telling.  You’ll have to read the book or find a spoiler.

There is a lot to be said for names and how they make you feel about a person.  By adding the formal Mr. or Mrs., you automatically have a feeling of authority.  That’s probably from years of grade school and all adults being Mr. or Mrs. and having some level of authority over us when we were kids.  Calling a person by their surname suggests holding that person at a distance.  You don’t know them well enough to be on a first name basis.  First names suggest a closer relationship, and nicknames are the territory where friendships lay.

I hated this book.  It made me cry.  I also enjoyed the book and even felt inspired after I finished reading it.

In fact, I felt so inspired that I felt the urge to write and I sat down immediately and wrote Change.  Of course, my story doesn’t fall into the same category of writing as The Road does, but if a book inspires a person then the author did more than something right.

It also inspired me to try writing Falling in a style similar to what McCarthy used in The Road.  McCarthy must have been on to something, because Falling was published in the murder/mystery anthology Mystery in the Wind by Second Wind Publishing, LLC.

A Plea to Self Published Writers

Maya Kavita Nov 27, 2010 2
"Because you write, you show the rest of us that there is life after work - that you can retire and have a…
Writing