The love story behind “Till Death do us Part” by Robert Orfali – The blurb on the back of the book begins: “Grieving a soul mate is unlike any book you’ve ever read, even though the story is universal.” It’s about a loving and talented couple who fought the death rattle of ovarian cancer for over nine years before taking Jeri, the wife, away.

It was not the sorry for-myself, OMG, what will I do now kind-of-book. Do not judge this book by its title. It was well-planned out lucidly-delivered with a heartwarming introduction to their life of over 30-years; their commonalities, their differences, their successes and Jeri’s last trip into the oceans of Waikiki, Hawaii.

Robert, the author and beloved husband tells us, “the loss of a soul mate is unmatched for the emptiness it leaves in its wake. The grief will vary according to the strength and length of your relationship. The more you’ve loved, the more you’ll grieve.” Their belief system showed us: 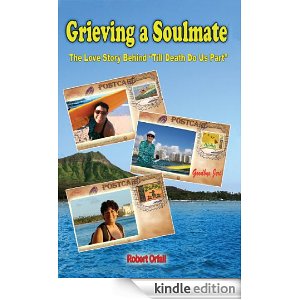 1. Fight the cancer very aggressively– She had three operations and nine years of chemo.
2. Live life to the fullest.
3. Leave the rest to fate.

I cannot imagine the grief of losing a soulmate after after living and loving 30 years together. I imagine it would far worse than losing a limb. You’d always be wondering why does my arm still hurt even though it is gone?

The definition of husband and wife of 30 years is not less than whole and not more than one. Both were educated, working Silicon Valley, successful in business when they were younger; and later happily semi-retired in Waikiki. Even during the later nine years of aggressive chemo, Jeri Edwards Ofali took on surfing in the beautiful waters of Waikiki; where her ashes are still doing their balancing act since 2009.

You can check out her website at […] her husband is offering this as a living memorial to their time together. Both lived with so much courage. I would guess that most of us would be more afraid of surfing in a dangerous ocean than dying. Every time she stepped onto her surfing board, she had to turn her life over to the Gods; balance being their best gift to each other in life and in death.

No one likes to talk about love stories that end badly. We like to think all love stories end happily- ever- after. I lost my own mom and pops after years of caretaker duties over ten years ago. I’m so glad I received this book to review. It is not a scary death-do-us-part type of book; or a grieving-type of book, OMG, what do I do now?; it is more of an ABC, conceptual kind of book taking on “death” in the most analytical and courageous way.

“Death is messy,” says the author, Robert Orfali, “just like birth.” Jeri may have come in alone but she did not go out alone. She had her Robert. He admitted his writings as well as his memorial website, MyJeri.com is healing to his heart. He described their final days as less than 10% of her life-story narrative which he wants others to remember. “Of course, I knew she was dead; I had seen the body. I was not trying to resurrect her. I was simply trying to reclaim her life story. I was trying to re-balance my memory of Jeri. She was so much more than the dead body I had seen at the crematory. She had lived a good life and she had a good death.”

If you read the book right, you’ll realize, the secret to marriage, life and death is balance. This is a good lesson for all of us. I am happy to recommend this book with all sales monies going to charity. I believe it to be the most healing book I’ve read in a long time. Thank you, Robert, for helping us remember that the secret to healing is in remembering unconditional love for the departed.