Observations and noticing small details and remembering them can often make all the difference in the world when an investigation is ensuing or reporting the news.

But, how often do we discount the sounds of a child, the screams of a temper tantrum as trying to get someone’s attention because they did not get what they want or just a child who throws tantrums. Reliving and revisiting events can be the difference between solving cases or not. But, when Molly Tanner witnesses the abduction of a young child and fails to heed her own warnings and visions her life crumbles when the little girl’s body is found two days later. 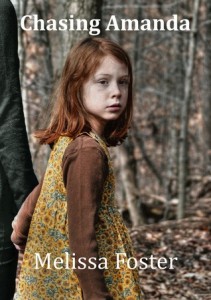 Living in Philadelphia seemed like torture as she faced the demons and reminders of her own self imposed guilt. Moving or running to another place would create at least a temporary haven for her and her husband to rekindle their marriage and refocus on their life together. So, they moved to Boyd, Maryland hoping to start anew.

Molly is clairvoyant. She has visions and is often capable of seeing things that most cannot. Reflecting on this murder from nine years ago, recalling many incidents with her young son before he went off to college Molly takes a hard look at her life in the present. What would motivate someone to kidnap, torment and confine a seven-year-old child? Twisted and demented, imposing rituals and demanding she recite prayers and follow her orders or endure her wrath. Terrifying to say the least.

Molly cannot wrap herself around the fact that Amanda’s death was not her fault. Enveloped in self-imposed guild she returns to the woods, hears a cry and immediately thinks and hopes its Tracey. Enlisting help and joining in the search does not find what she hoped for namely the missing child.

Cole tries to reason with her gut Molly needs more. Visions that come to light of a cavern, shovels and trees cause her to find someone that might know more. For now, Tracey’s cries fall on deaf ears. Reliving the experience with Amanda before realizing her fate, she plays the scene over and over again in her mind leading her to delve into the disappearance of Kate Plummer twenty years before. The information she unlocks enlightens her in more ways than one. Leading her to Officer Brown she learns that Kate’s body was never found, the man accused of taking or killing her the brother of the Pastor and the reason he was beaten to death sends chills down her spine and much more.

Rodney Lett was misunderstood not only by his family but those he encountered in the Boyds. Speaking with Pastor Lett she uncovers that he too had a sixth sense and often predicted events before they happened. But, his family did not consider him clairvoyant. His parents never understood his rants and raves and the end result was tragic.

Added into the mix is Pastor Lett and her secret that is behind the closed doors of Perkinson House. Who does she have locked up and why? Hannah, Molly’s close friend has a secret that she is hiding too? Who does she have that no one is supposed to know? Who is Charlie? Just who took Tracey and when will all the dots connect?

Delving even further would definitely put a strain on her relationship with Cole and her perception of some of her neighbors too. How will all three abductions link together and how many lives will be shattered and destroyed before a kidnapper is revealed? Just who remains to be seen as I continue with my review of Melissa Foster’s novel Chasing Amanda?

Characters that are unique and different whose personalities shine through on each page. One little girl names Tracey whose inner fears, torments and terrors you feel, hear and understand throughout the novel. A seven-year-old child who was really confused and did not understand the truths behind why she was taken. Thinking that Mummy just wanted to safe her from the toxins living outside was Tracey going to be brainwashed if she ever made it home. Was she going to do the same thing when she got older and answer the call when sent for she would be with those that called her.

Pastor Lett has a secret that would change the course of her life and surprise those living in the Boyds. What or who was hidden away in the Perkinson House and what would happen if the town found out? A simple note would change it all. Molly goes into the woods, the knowing takes over and what happens you will not believe. When all is said and done and the captor is finally revealed just whom it turns out to be you won’t see coming and won’t believe. Kate, Tracey and Amanda all victims, all taken.

Each member of this tightly knit group is guilty of something and has lived with an inner turmoil that needs to be released. Just how many secrets, lies, betrayals and murders have been committed? Who took Tracey and why? What will Tracey’s fate be and will she ever live a normal life if returned to her mother and father?

Forgiveness is not something that is easy to bestow on someone who has hurt and deceived you. Children are often resilient but some are too naïve to see the truth in front of them nor understand the reactions of adults in many situations.

When Molly is in danger and thinks she has finally found Tracey, just who helps her you won’t believe. Will Cole ever doubt her visions? Will they ever bond again and will this torn community ever repair the many rips, tears and holes that have severed their ties and become one unit again? Author Melissa Foster has given the reader much pause for thought in this novel of friendship, loyalty, redemption, hope and understanding.

Characters that are vividly described and one little girl at the center whose voice rings out loud and clear throughout the novel and hopefully are finally heard. One woman named Molly who would never give up or forgive herself if she did not try and find Tracey and bring her home.

Once again author Melissa Foster brings to light so many important issues but the most important is child abduction and the responsibility of parents to protect and watch their children. She describes a town filled with secrets and hidden lies. She unveils situations that many would never forgive.

The Train To Somewhere