Imagine in one strike of a match your world goes up in flames and the end result is a total global holocaust. What is left is smoke, ash, soot, burned buildings, pieces of glass and human beings so deformed so ill they can barely survive. Humans exposed to radiation and expelled and exiled not to contaminate others.

Martial law reigns. Those who question are exiled or punished. Those who dare to challenge the government tortured. Imagine a world devoid of flowers, trees, metal, medicines, books and paper to write on and the basic comforts of life. Picture the devastation shown in Japan just this month. Remember the Tsunamis in Hawaii and Korea as the world comes to an end and the result will rock your world and give the reader much pause for thought. 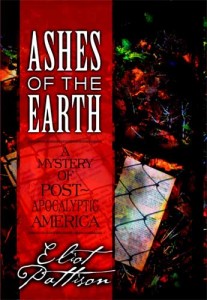 Hadrian Boone is the main character in this book. Often imprisoned on petty charges and beaten, tortured and abused by those in charge he manages to stay afloat using his intelligence, connections and instincts. A founder of the colony and former professor, he hopes to work to rebuild what is left of Carthage. His long time friend Jonah Beck has been secretly working on many projects including a new public works system, medications to heal the sick and a way to bring both the exiles in New Jerusalem and those in Carthage together.

But, what Hadrian learns and what happens to Jonah, will shake their worlds and rock the inner core of what is left of Carthage. Becoming more than a liability to his former friend Governor Buchanan, his often the brunt of many beatings, torturous experiences imposed on him by his one time friend.

Sometimes the search for answers brings new questions. As Hadrian Boone reenters the world of those exiled he learns the hidden truth behind his friend’s mission and what he was really creating with those in New Jerusalem as the camp was renamed. Appearance are quite deceiving and people are not always who and what you think they are.

A plot so diabolical, convoluted and intricate no one will saw it coming nor will they see the end result until it’s too late. The granaries are full, the food supply plentiful and the government blinded by their own greed. An ending so explosive that the world as they knew it, as you know it will never be the same. Who will win?

Healing the World with Poetry