“Deadly Decisions” is crime-driven novel interwoven with drama, suspense, wit and edge-of-your-seat action. Trouble and misery can be part of life’s ordeals, but for Ivanovich and Mancini they are everyday concerns.

After his debacle of a life in “In the Name of Revenge”, Pavel Ivanovich tries to find a new direction. Instead, his days are upended with the constant turmoil of drama with Teresa Mancini—the spoiled daughter of a mob boss, wanna-be agent and Pavel’s girlfriend—thrown in the mix. Bullets fly, bombs explode and people get hurt. Ivanovich’s existence is an entire commotion of murder and mayhem, including a near-death experience and many other, narrow escapes while Mancini tries to become involved waist-deep in every one of Pavel’s cases.

Travel with Pavel as he continues with crime-ridden, investigative cases while Teresa ‘tries’ to help him in “One Major Mistake”, the third in the Ivanovich Series, coming soon.

As seen on Hot Authors Report: 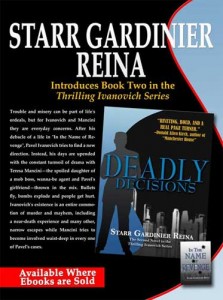 To answer the question, you needn’t bother looking up Starr Gardinier Reina’s profile on here, Facebook or elsewhere. The question has nothing to do with her as a person, but of one of her fictional characters. While she cannot reveal the name right off the bat—which is pretty obvious by the subject’s question—she let slip important clues within this post, so read carefully. And at the end, she does tell you the answer.

“It was a matter of getting even with the one person who spoiled my life’s aspirations and took from me those I held dear in the most vicious way imaginable. There was nothing more I wanted than revenge. And in its name I sought out the monster with resignation and determination and vowed annihilation of his world.

“Through perseverance, I managed to finagle my way into a prestigious position both within and outside of the organization. Being that close to the man I loathed was the only sure way I could carry out my revenge. But my one-track mind brought about even more devastation in my already messed up life. I loved and I lost, but it took me a long time to give up believing I could have whatever I wanted, even at the expense of others, and just comb through the wreckage I made of a love affair that resulted with a precious, little girl.

“I succeeded in getting my revenge, but not in the way I thought I would. Because of my obsession, I suffered by losing even more than when I started out on my implacable quest.

“You may not want to know the answer to the above question when you find out who and what I sacrificed trying to obtain my own brand of justice, not to mention the lengths to which I went to get it. If you’re still interested, you can read all about me in Starr’s Ivanovich Series, the first novel being “In the Name of Revenge”, if you didn’t already guess that.  Why in the world she started a series about me is beyond my understanding. My uh…better half as she would call herself, would be a much better person to highlight. Teresa Mancini is something else. Sorry, you only get to briefly meet her in the first book. However, being pushy like she is, Teresa forced herself to stand out in “Deadly Decisions”. At least in that book you won’t have to read so much about me. I’m really not that interesting.

“So, who am I? My name is Pavel Ivanovich. It’s a pleasure to meet you.”

Starr Gardinier Reina is an award winning author. She has had published two young adult mysteries: ”Cruel Whispers” and “Cruel Past”. Following those, she brought to life the Ivanovich Series. The first novel “In the Name of Revenge”, was released in June 2010 and the second “Deadly Decisions”, was being released February 1, 2011. She is currently working on the third in the Ivanovich series. She also pens short stories. One of these is called Cut, which won third place in a contest. When not artistically creating fictional characters, Reina acts as an executive editor for Suspense Magazine and often produces for Suspense Radio. Quarterly, Reina also publishes a free newsletter called WhoDunIt, which can be subscribed to at www.QueenWriter.com.

The Playground Watches Them

How Much is Too Much Texting?