I awoke this morning to a link from Two Lips Reviews, a top review group of love stories of all kinds. All I can say is that it made my YEAR…the only thing better has been feeling my daughter dance in my belly. 🙂

“A dying demon’s tip leads Rose to an abandoned town off the beaten path, a place once called Paradise Hill that’s no more than an unfortunate run-down shadow of the nice little place it once was, a place where people worked and kids went to school. Now, it shelters things that go bump in the night: vampires, ghouls…and the worst of the worst. Demons. Just what Rose is looking for. As a hunter, it’s her job – and her pleasure – to rid the human world of such deviant abominations.

Skriker does two things well. Fuck and kill demons. Women and his father’s kind fell at his feet, though in different ways. Handsome as sin, he was glorious to behold, both in bed and in battle against the same monsters that had killed his mother and little brother and dragged his old man off to Lucifer knew where when he was just eleven. Half human, his demon side provides him with all sorts of useful weapons, from his inner hellfire to the black claws that pop out of his fingertips when he shifts into the hideous beast that lurks beneath his rock star looks. 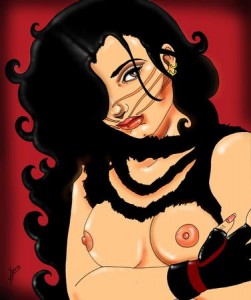 When Skriker arrives in Paradise Hill to hunt the derelict town’s newly reported nest of vampires, he finds that another hunter has arrived before him. And Rose, he quickly discovers, doesn’t like to share. Skriker has always been able to love ’em and leave ’em, but Rosie…she’s not like any woman he’s ever known. She’s big, tough, and dangerous. And her inner light intrigues the hell out of him, no pun intended. From where did she draw such pure white power? Who was she? And where does she come from?

As they work their bloody way through the vampires and ghouls residing in the Paradise Hill Elementary School, Skriker finally discovers why Rose has a set of wings tattooed on her back. But it’s when Rose discovers what Skriker really is that she must decide where her heart lies. Is she with him? Or against him? Zafira, the demon daughter of Lilith, might have something to say about that, since she wants Rose dead in the very worst of ways.

Sequel to Psyche’s Gate (Liquid Silver Books), Black Dog and Rebel Rose by Danielle D. Smith is the best Urban Fantasy love story I’ve ever read. It’s a short but action-packed adventure centered around the most unlikely of couples – one of darkness, the other of light. One rides an All-American Harley, the other a “Eurotrash” Ducati. He carries a shotgun, she carries a Glock, and they can both slice and dice with ninja accuracy.

Together, they deal in blood, gore, and bodily fluids. Believe me, their raunchy sex does more than just fill up pages. It’s profound and entrancing. And most of all it’s love – pure, deep, and intense. Each would give his or her life for the other. And you know that they will stand side-by-side against any adversity, something that both Zafira and Rose’s all-powerful father find out rather convincingly.

Skriker is tough, strong, and determined to wipe out every single demon single-handedly if he has to. Yet, there’s a depth of heart to him that allows him to cry with and for someone else. I loved that about him, even more than I loved his blonde sex appeal. And HE…IS…HOT, ladies! Black leather-clad HOT! In all respects, Rose is his perfect foil. She’s a black-haired bitch on wheels, a hard-core killer in combat boots and a body-hugging’ jerkin. But her soul is the other half of his. Together, they’re better than Bonnie and Clyde. Better than Bogart and Bacall. Better even than peanut butter and jelly.

Ms. Smith is now hard at work turning Black Dog and Rebel Rose into a graphic novel and screenplay. I would love to see her write a story about Skriker’s father, who – if he’s even half as tough as Skriker – just has to be alive somewhere and in need of his own Rosie to rescue him.”

Joyce White Dec 14, 2018 3
Even if you’re upset, you can choose to create an attitude that will free you in some way
Science