I’ve been reading romance since I was a young teenager. That moment when the hero and heroine (or hero and hero/heroine and heroine…you catch my drift), finally get it, let go of all their grudges, misconceptions and angst, and I can close the book on a happy sigh, is what it’s all about for me.

I want them to ride off into the figurative sunset together, and live happily ever after. There seems to be an increasing trend towards sequels lately, though. Sequels have always been a bit of a bug-bear for me. They got their happy ending, why not let them enjoy it, why throw more trouble in their path?

However, I can understand, both as a writer and a reader, how people can crave more from characters in whom they have invested a lot of time and emotion.
It presents quite the dilemma. 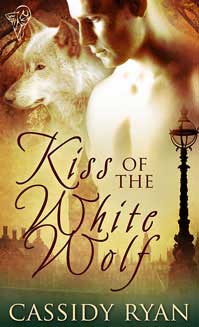 Like most writers I spend a lot of time and imagination creating the world in which my characters live, and it’s not always easy to let that go. Sometimes I want to return to that world, to write more about those characters, but I don’t want to put them through the mill any more than I already have.

I encountered this “problem” with my most recent book, Kiss of the White Wolf. I’ve grown very attached to Hal and Luke, and am as reluctant to walk away from them as a mother leaving her child on his first day of school. But after everything they went through to get to their happy ending (we writers can be very cruel to the ones we love most!),  it feels unnecessary—not to mention contrived—to create more conflict for them.

When I was writing Kiss of the White Wolf, I introduced a character called Milo. At the time I wasn’t certain that he had a purpose (a big no-no), but, not only did he turn out to be quite pivotal to the climax of the story, he has also given me a reason to return to that universe.
Getting requests for Milo’s story has been wonderful, and the ideas have been free-flowing. I now have the chance to write more about Hal and Luke, but as secondary characters to Milo, meaning that I don’t have to rock their happy ship—well, not too much!

By writing a “follow-up” book rather than an outright sequel, I get to expand on the world I built for them, to flesh out the character of Milo, and create more new characters. Perhaps most importantly, there is no feeling of short-changing the readers by just giving them “more of the same”.

Written by Cassidy Ryan, author of Kiss of the White Wolf by Total-E-Bound Publishing.

…And The Dead Walked Out of Their Graves

Where is the Funny Bone Located?