Two women, best friends, are living together on a small, run-down farm far out in the country. Having tired of all the chaos of modern life, they’re trying to make a simple living raising chickens and gardening.

They spend their days tending the garden, preparing healthy meals, and protecting their hens from a hungry fox. 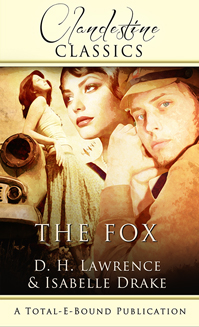 One night, a hungry fox of another kind shows up on their doorstep. He stands under the porch light, assessing them both, his dark gaze taking in one and then the other. Ten years younger, twenty times rougher, and hungry for something hotter than a chicken dinner, this ruthless animal knows what he wants.

Or in this case, who he wants. And, true to the nature of a fox, he’ll use all his cunning to get it. He sets out to seduce one of the women. The other woman, sparked by the competition, does what she can to keep the dominating newcomer from possessing the object of her desire. One woman caught in the middle.

Think this is a story inspired by 50 Shades of Grey? Think again. It’s the plot of The Fox, a novella written by DH Lawrence, published in 1922. Thanks to Total-E-Bound’s Clandestine Classics, I had the chance to revisit this ultra-sexy story. Clandestine Classics are modern retellings of classics like Jane Austin’s Pride and Prejudice and Washington Irving’s The Legend of Sleepy Hollow.

I selected The Fox for my Clandestine Classic because it is a modern story, written before its time.  And as a gothic, it gave me the opportunity to explore the darker side of human nature. There isn’t much darker than seeing another human as a possession, which is what happens in this story.

Revisiting The Fox was different because my task was to heat up the already existing story.  To make sure I maintained DH Lawrence’s voice, I read the entire story several times to capture the rhythm of the writing. Then, I began tucking in small details and short sections of dialogue.

I worked through the entire story in this way, slightly enhancing what was already there. Then I went through again, pushing the limits of the sensuality and then again. And again. By doing it this way, I was able to maintain the tone, style, and integrity of the original work. The result is a sexier, hotter version of an already simmering classic story.

Excerpt from The Fox, a Clandestine Classic by D.H. Lawrence and Isabelle Drake:

He had been sawing logs for the fire in the afternoon and his entire body had been, at one point, covered in a fine sheen of perspiration. What remained now was the scent of his exertion and the lingering effects

of the satisfaction that comes across a man when he has done a hard job well. Darkness came very early. It was still a cold, raw mist. It was getting almost too dark to see. A pile of short sawed logs lay beside the trestle.

March came to carry them indoors, or into the shed, as he was busy sawing the last log. He was working in his shirt-sleeves, and did not notice her approach; she came unwillingly as if shy. When she bent down he saw the firmness of her muscles and the easy way her strong arms moved the logs. She was a fine prey, indeed and they both knew it.

He saw her stooping to the bright-ended logs, and he stopped sawing, letting his probing gaze rake across her. A fire like lightning flew down his legs in the nerves and he was more aware of March than he ever had been. Everything about her called to him, her scent, her body, her essence. It was not enough to be near her. He needed to possess her. Indeed, master her.

“March?” he said in his quiet, young voice.

She looked up from the logs she was piling.

He looked down on her in the dusk. He could see her not too distinctly and he struggled to see what he could of her. If only she would stop shrinking away from him and expose herself to him as she ought to.

“I wanted to ask you something,” he said, feeling that lightning fire burns in his limbs.

“Did you? What was it?” she said. Already the fright was in her voice. But she was too much mistress of herself. And it was that control, he realized that he most wanted to take from her. She would weaken and give herself to him. He would see to it. As he felt that was what he wanted, he knew she must want it too.

“Why”—his voice seemed to draw out soft and subtle, it penetrated her nerves—”why, what do you think it is?”

She stood up, placed her hands on her hips, and stood looking at him transfixed, without answering. Again he burned with sudden power.

“Well,” he said, and his voice was so soft it seemed rather like a subtle touch, like the merest touch of a cat’s paw, a feeling rather than a sound. “Well—I wanted to ask you to marry me.”

March felt rather than heard him. She felt him everywhere—on her face, across her breasts, deep inside her, filling her and taking her soul. She was trying in vain to turn aside her face. A great relaxation seemed to have come over her as she had known this moment was coming and finally it had arrived.

She stood silent, her head slightly on one side. He seemed to be bending towards her, invisibly smiling as he came for her. It seemed to her fine sparks came out of him, ready to jump across to her and burn through her skin.

Article was written by Isabelle Drake author of Clandestine Classics: The Fox