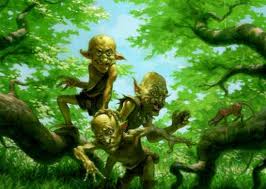 For far too long in my humble opinion, your average southern wood goblin, or any goblin come to that, has been much maligned.

Far from being the loathsome evil creatures portrayed in fairy tales by human authors like the Grimm brothers to frighten children in centuries past, they are, with one or two exceptions, entirely friendly.

I have got to know the author of these tales – Globular Van der Graff, or Glob as he likes to be called, really well. I am of the firm belief that on the whole they are entirely misunderstood creatures.

In a time long past before humans began inhabiting the world; there was a magical world hidden away from prying eyes in the northern hemisphere. It was called Goblindom. It remained hidden behind a magical barrier when humanity first appeared.

In those early times, Goblindom fought humans and won. As the ranks of humans inevitably increased in number and began to destroy every living thing they deemed inferior, Goblindom’s inhabitants retreated behind their magical barrier to prevent any further contact.

Initially, the humins, our predecessors, treated all goblins abominably when the two races first met, two thousand summers before this anthology begins. But after that unfortunate meeting, both races lived side by side in peace ever afterward, keeping a weather eye on the warlike humans living beyond the barrier.

The five wood goblins I met one day, several months ago, in a glade not far from here, when I was having a snooze in the afternoon sunshine, have existed till now, hidden away from humanity since those days thousands of years ago. They are Globular Van der Graff (Glob), Makepeace Terranova (Make), Byzantine Du Lac (Byz), Eponymous Tringthicky (Mous), and finally, curmudgeonly old Neopol Stranglethigh (Neo).

They continue to inhabit the most remote forests living side by side with all other woodland inhabitants, hiding away from my kind humanity. These friendly little beings seem to have taken over my life in one way or another.

At their insistence, I began to write down what Glob dictated to me. He would often wake me in the dead of night by standing on my chest, raring to tell me of yet another adventure or some mishap or other that had befallen him or one of his brothers. Why he chose me for the task of translating and recording his tales, I have still to learn. Needless to say, I am honoured to do so. It is not every day that a lowly human is given such a chance.

I have created for you an eyewitness history on paper of their world which they shared with our forebears the humins, along with witches of both black and white persuasions, griffins, wyverns, mountain gremlins, ogre’s, elves, trolls, dragons, the odd wizard or two and an assorted collection of animals and birds.

Among the many you will meet as you read Glob’s tales, is a singularly engaging character, a one-eyed lisping raven named Bejuss. At Glob’s insistence, I have also left the conversations between the characters in their own peculiar ancient vernacular rather than modern-day English. When Goblindom existed, all the many kinds who lived within its borders spoke the same language.

This anthology is a snapshot of their lives, adventures, and misadventures. I hope that when you have read them, you will look kindly on these tiny woodland individuals in the future, should they choose to visit you. Now please, sit back and turn to page one of this, Glob’s anthology, to enter their magical world.