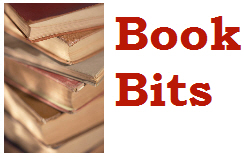 To add to his already remarkable list of blogs (Sun Singer’s Travels, Malcolm’s Round Table, Sarabande’s Journey, Morning Satirical News, and probably several I’ve forgotten), he’s now added Malcolm’s Book Bits and  Notions, where he collects and posts links to articles you would read if you knew they were out there to read.

He lists feature articles, such as Amazon Signs Up Authors, Writing Publishers Out of Deal – “Amazon.com has taught readers that they do not need bookstores. Now it is encouraging writers to cast aside their publishers.”

He makes a note of reviews, such as Radioactive: Marie & Pierre Curie, A Tale of Love and Fallout by Lauren Redniss, reviewed by Jesse Kornbluth.

Why isn’t everyone bookmarking this site or following it? It’s one of the best book bits blogs out there. And of course, why wouldn’t it be? Malcolm Campbell runs the blog.

When Your Beloved Piece of Art Breaks