The Upside of Down: Misfortune Renders Opportunity

The upside of Down: We have all been tested over the course of our lives. If you have lived a few years, you must know some form of misfortune or another. That is called living. That is called life. Count your blessings, even if they come your way disguised in unexpected painful moments. Isn’t that what they say?

This first part of a series of posts on opportunity is a joyful one – for the most part. Even the death of a loved one, when understood as part of life can render itself as one of the best moments in a person’s life. But, I am getting ahead of myself here. 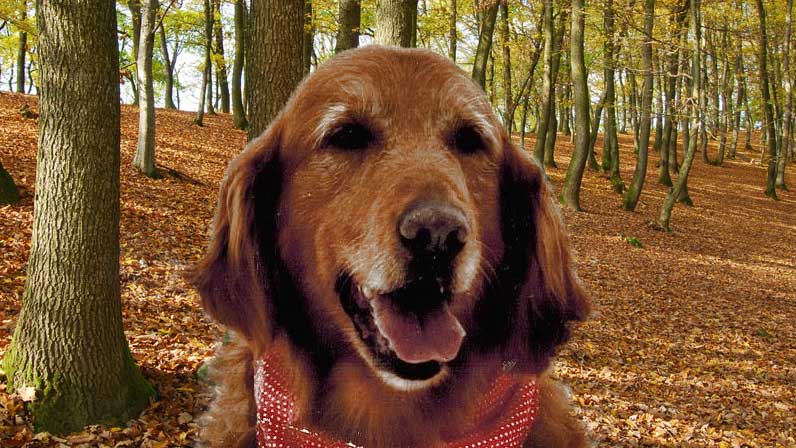 Let’s just say, for now, that this is a love story that, while finite on this physical plane, will live forever in my psyche. This is, in truth, the short version of a long love story: my love for Rusty.

At some point in early January 1997, my kids and I had a family reunion to talk about a long-awaited subject: getting a puppy. I was ready. As a parent of teens and pre-teens, I knew that I was the one who needed to be ready for the dog.

The way my version of the story goes is this: the children met for a while, talked the whole dog thing through, and came back to me with a verdict: we were getting a Golden Retriever, it was to be male, and his name was to be Rusty.

Alright. That was pretty specific; not a lot of space for negotiation there.

May 21, 1997 – after five months of continuous search – was the day in which he entered my life. He was five weeks old, furry, and simply adorable. After responding to yet another ad, I had gotten to the house where a litter of puppies was kept. Upon arriving, I saw that the whole litter was in the back of a pickup truck and, in true puppy form, they all came rushing to meet me in that charming way that makes you want to take all of them home. I was tempted to do so, but could barely afford to buy one.

Oh, but not all of them showed interest in me. There was one fat, fluffy, adorable-looking creature the color of rust that simply ignored me when presented with a bowl full of milk that now he did not have to compete for, as all of his siblings were occupied trying to get me to take them home with me. If it is true that life has a way of orchestrating perfection, then that was a perfect example to illustrate that point. He, in his insatiable hunger – which was proven to be his true nature over the course of his fifteen and a half years with me – separated himself from the pack and made himself known to me. You see, he ignored me completely. He made himself irresistible by doing so. Oh, women! When I saw him, I spoke the words, “So you are Rusty.” I picked him from inside the bowl of milk – yes, he had submerged himself in it – looked into his eyes, and confirmed that I had found not my children’s dog, but my life companion. I took him home.

Rusty was loved – no, he was adored – by every person who met him both in Puerto Rico and California. He was a crazy, gigantic puppy that made everyone smile as he roamed the Earth. He had some dignity to himself as he grew old. He was strong, poised, loving, lovable, loyal, and fucking gorgeous. More than that, he loved me with all his heart. I could see it in his eyes and could sense it in the way he overstayed his welcome on this Earth to keep me company.

Rusty got sick with cancer in 2009. He underwent surgery after surgery and came back stronger every time. His old body, however, gave way to decay. Arthritis took over his body, and he still refused to die. Every time I thought he was ready, he would bounce back. That is, until one Monday night in late July 2012. That night I came home from work and lied down with him on the floor. I stroke his still beautiful fur and finally uttered the words that would free his soul, “You have to go. I will be all right.” The next day I had to help him go out before leaving for work. By the time I came back home, he could not stand. I knew he had listened. I knew it was time.

My beloved Newton, Rusty’s son, and I kept watch all night as Rusty lied on the family room’s floor unable to move.  My son had come by earlier to say his good-byes. He, too, knew it was time. The vet could not come until the next day, and I thought that he would pass on without further help. My grandson’s diapers served to contain the urine that was coming out of his body. My baby, who had always been so clean and had always smelled so good, was now smelling of urine. I honored him in any way I could possibly think of. I held him, kissed him knowing that it would be the last time I would do so, read “The Little Prince” and “Jonathan Livingston Seagull” to him, and even watched “Dexter” as part of our farewell ritual.

We had always watched the show together on Sunday nights and then reruns whenever we could. I had a beer with him and celebrated our awesome life together. Rusty represented my most committed relationship, aside from the ones I have with my kids. At 4:00 PM on August 1, 2012 – thirteen years to the date of my brother’s passing – Rusty exhaled for the last time while been cradled in my arms, sang to, and been told how much I had loved him. The vet and her companion were in tears as we said our farewell. My baby was finally resting.

Rusty gave me something that no one else had given me before: the chance to care for someone from birth to death. He normalized death for me and allowed me to honor our life together. He was my companion, my guide, the driving force behind some crucial decisions. He stayed home with me as the kids visited with their dad over the weekends. He kept me company when my husband of so many years married a new woman. He witnessed my joys and sorrows. He was the one lying under my desk as I wrote paper after paper for college and graduate school while rubbing my feet on him – we both loved that. Furthermore, he got to meet my grandson. He was, and will forever be, my love.

Today, Rusty’s ashes sit atop my desk as I go through my days and write. My mother kept my desk for over ten years in her house and gave it back to me upon my return to Puerto Rico. Now I get to see Rusty’s urn with his name on it as I write for the different publications that I am contributing to.

He continues to be my love. I am healthy enough and mature enough to understand the cycles of grief and to understand that one day, perhaps, I will let go of his ashes. If and when I am ready, I will do so. If I am never ready, my daughter has promised to take over that responsibility and will make sure that his remains, Newton’s, Stella’s (the new addition to the family), and mine are disposed of as she sees fit. She is screwed.

As Rusty took his last breath I knew that my life was about to drastically change… Misfortune turned into Opportunity was about to show its face to me over and over again.
Stay tuned.

You can turn your back on love, but love will never turn its back on you.
~ Alan Cohen

Differentiation: A Book Marketing Must