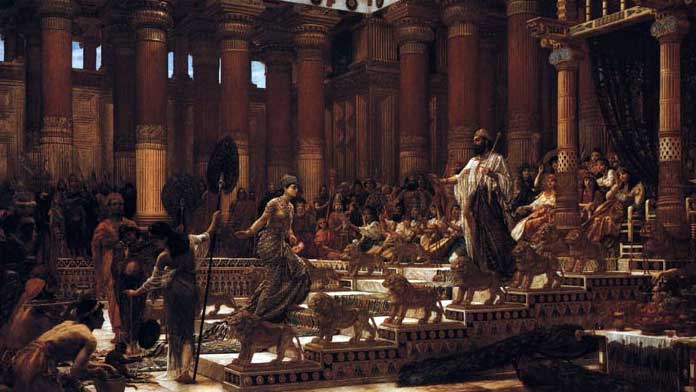 One of the most famous biblical stories of the outstanding wisdom of King Solomon, which won the expression “The Judgement of Solomon” relates to the clever tactic by which Solomon resolved a literally unsolvable dispute.

The story related in Kings 3:16-28, tells of two prostitutes who came before King Solomon, bringing with them a single baby boy. Each mother told the same story: that they both lived together, that both had given birth to a child, that one child was dead in the morning and that the live child was hers.

Each mother accused the other, that after having discovered that her child had died during the night, its mother had stolen the other mother’s live baby and replaced it with the dead child.

Thus, each mother claimed, on waking up in the morning, she had discovered a dead child on her breast, which was not hers.

In a dispute such as this, where there is no evidence or witness, King Solomon’s solution is fascinating. After some deliberation, he called for a sword to be brought before him. He declared that there was only one fair solution, namely, that the live child should be split in two, each woman receiving half of the child.

Upon hearing this terrible verdict, the baby’s true mother cried out in horror and anguish, “Please, My Lord, give her the live child – do not kill him!” However, the liar, in her bitter jealousy, exclaimed, “It shall be neither mine nor yours – divide it!”

Realizing that a true mother’s instincts are to protect her child, Solomon instantly gave the baby to the real mother, who was willing to relinquish her baby in order to save its life.

The story of Solomon’s audacious verdict, which flushed out the truth in the dispute and revealed who had spoken the truth and who had lied, has been often used metaphorically, to depict a decision, which may risk destroying the subject matter of the dispute itself, rather than allowing either disputing party to share in it.

Ironically, of course, in the biblical story, Solomon in his wisdom indeed avoided the destruction of the subject matter of the dispute, namely the baby, and pronounced a true judgment, based on his profound knowledge of human nature.

Hi I'm Charlene!
I love to keep my friends and family entertained with all my creative blogging. I have such fun and varied interersts that just keep buzzing round in my head all the time. This is my fix of creative release. Do check back often + leave comments. Please, thank you. Peace out.

Joyce White Sep 24, 2011 0
Sculpting the Heart with Art Therapy "Joyce White has aligned herself with spiritual principles that govern the…
Book Review