“Damn.” Awkward like a horse in a confined space, Byron hit his head despite stooping down. A wave of claustrophobia struck him.

Though huge by its predecessor’s standards, the sub still seemed overcrowded with Eileen and five men inside, and Byron’s stocky build took up more than his share of space. He inhaled a deep breath and released it slowly, trying to focus on the mission ahead. 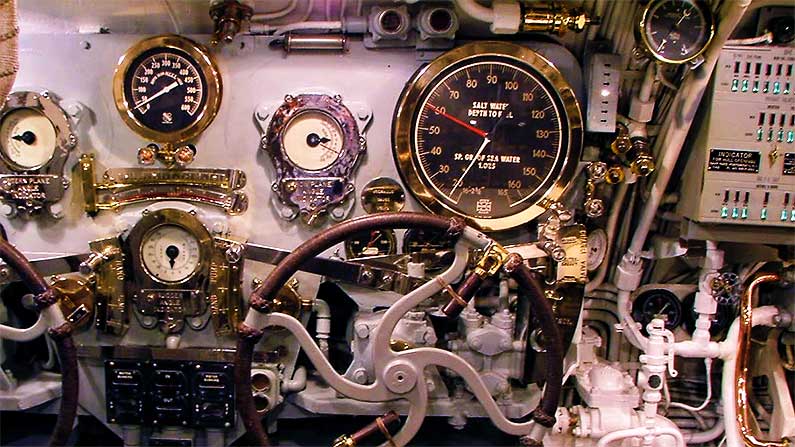 “Please be seated and buckle up,” the skipper announced from the helm.

Byron sat on the starboard side with Eileen facing Yoshino and Nishihara. Wulfstein sat behind Kiichi. A stand, equipped to secure his laptop, freed the Professor’s hands for other duties.

Outside, a crane hoisted the sub from Satsuma Maru’s deck and lowered Keiko into the sea.

Once the sub gained stability, Akita detached its cables. Keiko’s front porthole was larger than the four on its sides and one at the rear, all having handrails for support should they encounter any turbulence. One at the top and bottom made eight in total, providing a view in all directions.

“You may unbuckle your seatbelts,” Kiichi said before he touched a button, lighting up the interior.

Byron admired the state-of-the-art digital displays where a small wheel and console sat. Just three days earlier, the pilot had briefed Byron and Wulfstein in the lab. Now, sitting within, they could see the submersible and ask specific questions.

“The sub can be placed on automated mode,” Kiichi explained. “This frees the skipper to concentrate on the surroundings as the sub runs on a preset dive.” He pointed to the console. “All critical computer functions have analog or mechanical mode.”

Byron glanced around, impressed by Keiko’s capability while the skipper detailed how the equipment worked, including the sensors outside the craft. The vessel maintained four high-resolution video cameras that transmitted and relayed images and sound. It also included gadgets to detect any electromagnetic radiation. Toward the rear, a machine produced oxygen from the seawater and circulated air throughout the craft’s interior. The weight of the ballast tanks enabled the sub to remain submerged for many days.

When the sub rocked and tangled in the waves, Byron’s claustrophobia intensified; the sub smelled suffocating and stuffy. Chest constricting, pulse pounding, he raked his hands through his hair as the atmosphere closed in on him, making him feel like a bug in a tiny jar. Disoriented, Byron struggled to remain seated, his chest tightening. Nauseous and unsteady, he started to hyperventilate.

Eileen touched his shoulder. But Byron shut his eyes, trying to fight the dread of an enclosed space that had troubled him since Rockdale. The pressure created a ghastly buzz in his ears and he cringed and belched when bile rose in his throat.

“Pff! We’re not even submerged,” he groaned. “Yet I’m feeling claustrophobic.”

Kiichi turned. “You’ll feel like passing out, but you’ll get used to it.” He pointed toward the stern. “Just in case, there’s a barf bag over there.”

“Put your head between your knees,” Eileen suggested. “You’ll be fine.”

Byron did as he was told. He tried to appear eager and courageous, but his energy sagged. The image of Nobuko returned unbidden to his mind. Her dark, upswept eyes that made her face so exotic kept dominating his vision. He frowned, disappointed at himself for being so awkward in her presence. This, compounded by the paralysis before the Sensei, and the possibility of failing to impress her upon his return, added to his despondency.

EILEEN TURNED HER attention to explore the gadget-packed console. All the instruments are pulsing like organs of a monster. But what if one of them malfunctions? She wanted to ask but noted that Wulfstein had monopolizing posing questions to Kiichi about how to operate the craft.

“How do you drive this sub?” he asked the skipper.

“By pressing the pedal with my right foot, but by pressing on the right heel, it slows down and then reverses.”

“Indeed, this frees my hands, too.” Kiichi pointed, then stepped on the pedal and the prow cleaved the waves, leaving Satsuma Maru behind.

“How do you move left or right?” Wulfstein asked.

“I press the edge of either side of the pedal.”

“Just press the top edge,” Kiichi said, demonstrating. “The controls and functions are easy to master. In fact, it’s simpler than driving a car.”

Soon, the water rose up the portholes and covered the sub. After Kiichi switched to automatic mode, he checked the gauges.

Eileen moved to the console and asked more questions. Kiichi responded by giving a briefing on the need for future explorations, about how marine scientists developed a plan to make their submersibles truly deep-sea explorers.

Dubbed Miiko, a remote-operated mini vehicle, it could retrieve objects weighing up to a hundred pounds on a fiber optic cable, acting as the manipulator arm of Keiko. Like the tail shed by a lizard, Miiko could be cut off by the skipper if it became entangled in rocky walls or wreckage.

“What do the green and red digital displays mean?” Eileen asked.

“They’re receiving signals linked to listening devices planted on the seabed,” Kiichi said. “Nothing is left to chance.”

“Conventional subs cannot keep pace with sharks, octopi, or other strange-looking creatures,” Nishihara said. “But we can track their movement with Keiko.”

“Our new sub is quicker,” Kiichi added. “Its turning radius is tighter, enabling it to support more daring explorations.”

Eileen checked the control room, dark except for the images on the monitors and the flickering lights on the consoles. The compass pointed southeast and the pitch meter indicated a descent at twenty knots. While gazing outside, something pulled her body toward the bow. It’s a pandemonium! It’s descending to Hades! Her throat constricted as she steadied herself. Outside, a school of red snappers swam through the turquoise water, followed by a massive shadow.

Like a Stealth bomber, a giant stingray overtook the sub from above; it cruised with wings and a tail. Eileen stared at the video screens, watching the monster glide away.

Time ticked by, the scene merged from royal blue to indigo. A blob lifted itself from below. It changed shape, picked up speed, shot into the open and elongated into a streamlined missile. Almost two feet long, it sprang upward. A stream of tentacles rippled its mantle like a flamenco dancer and it glided away without a trail. Then another blob appeared. It changed shape and catapulted toward the very edge of the light. A squid! One of its cousins could drag a ship down to the ocean floor.

Another school of fish swam by, their sleek bodies radiating as if coated with silver glitter. Scrounging for a meal, they kept pace, their lips protruding. Then they sprang away, as though they had all caught something, and disappeared.

Ten yards away, an exquisite jewel-like fish with multiple colors, the size of the palm of a hand, sprang and darted around.

Eileen marveled at the way the lionfish fluttered like a butterfly. More creatures flapped by like eagles in flight, heading toward the beam. When they came closer, an anglerfish shone its luminous bait, followed by lantern fish. “Fireworks!” She pointed. “They’re courting.”

“We should be able to see more clearly if we dim our headlights,” Wulfstein said.

Kiichi complied, reducing the beams to a glow. “Can you see anything?”

“Wow!” Eileen’s eyes darted at the flashes of lights. “Like scattered stars.” Off the beam, in a pitch-dark void, an occasional small jellyfish flashed by. She stood close to Wulfstein. He smiled, she nodded. Her nerves tingled, the feeling of a common endeavor grew, and whenever his eyes lingered on her in the dimmed light, her heart jumped.

“Something unusual, Eileen,” Wulfstein said. “Have you noticed these fish are swimming upside down?”

Eileen focused intensely. Though she couldn’t figure out which way was considered upright, she adored the way these creatures swam and somersaulted with amazing skill. “No, they swim effortlessly with grace.”

“Not so, Eileen, they may seem graceful, but they’re disoriented and struggling. They’re colliding and losing their direction.”

She blinked, clearing her vision. The fish bumped around, showing off their bioluminescence, jolting up and down, flipping in and out of the beam. Then, they all disappeared.

Soon, ratfish, brotolids and slimy hagfish scavenged on debris settling down from the surface.

The cabin pressure rose and the hum reverberated when Keiko entered the silence of the mystifying deep. The size of a small carrot, a segmented sea worm emerged from the darkness and spread out jaws that looked like miniature ice tongs, ensnaring smaller fish. It wiggled a striped tentacle, but as Keiko illuminated its shiny skin, the little creature undulated, displaying a fanciful flight, then vanished.

Eileen squirmed as an eerie feeling pervaded the dive. Only sea cucumbers, sea anemones and starfish made the briefest of appearances. After a long interval, a small predatory viperfish with glowing lures and two enormous six-gilled sleeper sharks swam by. Soon, they all disappeared, and only white flakes fell and swirled in a dark world of their own, like thick marine snow seen through the headlights of a car during a dark winter storm.

MiriamSPia May 29, 2012 0
Crown of Vengeance - Review Book Review by Stephen Zimmer. Style What makes this book stand out from others?…
Short Story