Men and Women: An Observation

I was sitting with some friends of mine, as usual having a cup of morning coffee. Most of us are married, with jobs, and all of us have children.

Every morning, before we start the day, each one of us with her own daily schedule, which has already begun two hours ago anyway, with waking the children, which is a small struggle in itself, since no child goes quickly to sleep, nor ever wakes up immediately. 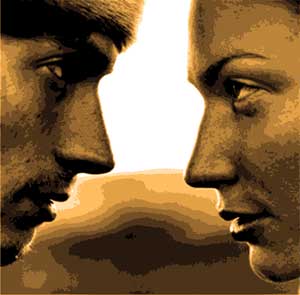 Quickly making breakfast, sandwiches and of course, dressing and so on, the coffee break is a small intermezzo

until the actual day begins.

We all agreed that having a sick husband is worse than a sick child. It’s not his best hour, somehow he manages to conceal completely his manly hood, the image of your strong man of the house, your lion. He becomes a weak mother’s child who expresses his misery out loud. A man who with every movement has to declare his sickness, it’s almost as if he is play-acting, and the sickness is only in his mind.

We all agreed that it gives us nothing but resentment towards them. We feel like it’s difficult for us to identify with their pain, their own children are behaving more appropriately when sick and what’s the deal with the special menu requests?

Shouldn’t the appetite simply disappear once the body is so weak? And how do they answer the phone? As if they have just been beaten to death, it’s just pathetic. Where is their dignity?

How about proving just how much of a man you really are, when times are not optimal when the road is rocky. While we, the mothers, won’t allow ourselves to feel sick, we can actually go on for some time totally ignoring our health, just to keep the life routine going.

Also, when really sick, we women aren’t completely useless, we still combine sickness with chores, laundry, or something. Come to think about it, it might be jealousy talking because women won’t allow themselves to take a break, even when it’s legitimate. But still, I wouldn’t have it any other way, so I guess we are doomed only to complain about them, and nothing can be done to change this natural difference between men and women, it’s always been like that, and will stay the same, also after we are gone.

Hank Quense Oct 17, 2014 0
Scene Design in Writing INTRODUCTION Just as words are the building blocks of sentences, and sentences are the…
Writing