This is my interview with Jasmine Giacomo as it appeared on my blog, Unwritten on April 11, 2011. Enjoy!

Mundaze may have hit you hard today, but fret not–for interview #22, I have here the fabulous Jasmine Giacomo, author of theLegend of the Shanallar duology: The Wicked Heroine (Book 1) and the recently released Oathen (Book 2). Please visit and follow Jasmine’s blog, Worlds of Jasmine, where she posts book reviews, free reads, and some works in progress.

Welcome to Unwritten, Jasmine! As your “about me” section says, you are the mom of two young children. So, inquiring moms want to know…how do you manage your time as both mom and writer? And what else do you like to pursue in your spare (yeah, right) time? 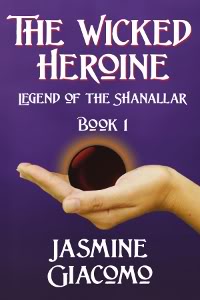 It’s a combination of patience and a killer mental grip on whatever I’m doing at the moment. I’ve learned to accept that I’m never going to get anything done uninterrupted. My kids come first, so if I’m working on a story and they need me, I get up and help them, for however long it takes. Whenever I get some time to get back to my project, I’ve learned to hang onto it in the back of my mind so that I can pick up where I left off. Most of my other spare time is given over to reading, though I teach a class for kindergarteners at my church once a week, and I enjoy geocaching with my family when time and weather allow.

I’ve had the pleasure of reading The Wicked Heroine, and reviewing it. Take a moment (or three) and tell us about it and the sequel, Oathen (which I’m diving into now). Also, what inspired you to write these and how long was the process?

The Wicked Heroine and Oathen tell the story of one woman’s search for redemption and vengeance, seen through the eyes of her mortal companions as they struggle with their own coming-of-age issues in a dangerous world whose magic is dying out. They join with her and form an expedition to travel halfway around the world together in order to destroy an evil magical book before it can be awakened, but between those who would use the book to bring back the golden age of magic and the plans of our heroes’ erstwhile allies, they’ll have an interesting time of it. 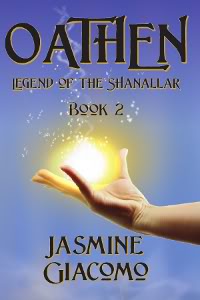 I came up with the story’s end first. What would happen if an immortal woman tried to destroy an indestructible, sentient book (loosely based on the irresistible force/immovable object concept)? Why would she want to do that? How could it even happen? Or would she fail, and what would that lead to? Filling in the explanation for all that backstory is what created the full duology. It took me about six months to write the rough draft, which was originally just one book. I decided to split it into two books when editing started because it was so long. The Wicked Heroine was released in the spring of 2010. Editing on the second book followed, and Oathen was released in February of this year.

Truthfinder and Seals of the Duelists are both recent ideas in my head.Truthfinder is a trilogy that follows the story of a barren woman in a society that reveres fertility, and how that has forced her to accept hard truths in life and to find her own path–archaeology–despite her culture’s attitudes. Her personal tragedy gives her the drive and ability to seek a terrible truth that will affect everyone, and not everyone will be able to handle what she learns.

My only mystery series is just getting started, with book one nearing rough draft stage. Margarita Williams Geocaching Mysteries is a cozy series that will follow a puzzle-maker as she gets involved in murders connected to her favorite hobby, geocaching. Since geocaching is an outdoor sport, and people often travel to new and interesting locations in order to find new geocaches, I’m excited about all the possible locales I can use for sequels. I’m taking a vacation back east this summer, and I fully plan to scope out future sequel settings.

Well, the answer to this question will probably seem just as random. My biggest phobias are things that swarm, and beer. I grew up across from a bar, see, and the fights and the cops and the vomiting on my sidewalk were too much for my 5 year old self. All I ever smelled was beer from those incidents, and now I can’t be within smelling distance of the stuff. Things that swarm, well, I’ve only got two hands for slapping bugs. It’s basic math, right?

Sure. Here’s an excerpt from the first book in the Seals of the Duelists series,Elements of Allegiance:

“Are you both entirely insane?” Calder yelled, standing up by the hex house fire pit after Bayan and Kiwani confessed to the rest of the hex that they had dueled illegally.
“Not quite,” Kiwani replied. “We were doing quite well with our safety rules, until someone tried to murder me. And since then, I have learned a lot about Bayan’s true character, and I can admit that I had misjudged him. He’s shown himself to be a true friend, especially considering my own past behavior.”
Calder shook his head, looking to Tarin and Eward. They didn’t know how to react either. “What aren’t you telling us?” he asked of Kiwani and Bayan. “I’ve heard some strange things in the barracks halls. Assassins? Near-death experiences? Bayan stabbing Kiwani in revenge for past grievances? Which is it?”
Bayan and Kiwani shared a look, and Calder could tell they were trying to decide how much to say. He ground his teeth.
Bayan began the rest of the story, explaining to the others about the mysterious assassin, then how he had rushed Kiwani down the mountain to Doc Theo’s after pinning the would-be killer in ice.
“Then I hurried over to Instructor Ignaas’ home and told him about the attacker. He said he would take care of it, but the last I heard, the people who went up to search for him didn’t find him anywhere. They didn’t find any trace of him at all; just the bloodstain on the rock where Kiwani was shot. The only proof I have that he ever existed is this.”
Bayan lifted up a broken metal chain, from which dangled a small, black, featureless pendant.