In this dream, Alan Rickman was young. We were outside in nature but I don’t know if we were by a beach or a desert or if we were just in a particularly arid place but I remember that the ground was dry and sandy.

It was summer and the sun had set but it was still light out. 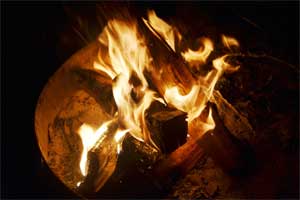 There was a group of us but I didn’t focus on the people I was with, rather I was just aware that I was among a group around a fire, listening to Alan. He was talking about social injustice and was very engaged in what he was saying about it. He told us the story of when he was in Morocco and he saw a man who was impoverished and miserable. Alan then acted out what he saw in the man: he was squatting, leaning against a wall in a dirty street, his face in his hands. Alan could see the man’s eyes, though, which were fire-lit as he was looking out in silence, deep in thought. Alan imitated the look the man had in his eyes. Alan could see his misery but he could also see how the man had completely resigned himself to his poverty and misery. Like they say in Morocco “Inch Allah” (“If God willed it”), the man thought he had no chance to be saved, helped or even have his situation change at all.

This was very upsetting to Alan, to see this man who had completely resigned himself to a living hell because no one would help him. Having gone back to that memory in his story-telling, Alan was then taken over by the emotion that seeing the man had invoked. Alan began to cry. I could tell from the way he struggled to allow his tears to fall and how he didn’t sob but kept silent, that Alan didn’t like to cry, especially in front of people. I could see what I’ve often seen when men who don’t often cry, I see the boy in their eyes. They look so completely vulnerable and in need of comfort, and that’s exactly how Alan looked. He looked up at me, with an expression as if to say “help me”. I immediately went up to him and put my arms around him.

At this point I was reminded of friend of mine, who is very sensitive and has trouble expressing emotion. I stood there with my arms around his waist, my head against his chest. Alan held me and as much as he needed my comfort, he was also struggling with how to receive the love he was getting from me, as if, once again, expressing and feeling emotion was something he was uncomfortable with. He then decided to sort of “flow” with what he was feeling. He picked me up and walked with me in his arms, gently swinging me round and round as if we were dancing. I remember just holding him while he was doing this and smiling and kissing his cheek. It felt very fraternal. Alan then set me down in an olive tree and I sat among the branches. We smiled at each other and I woke up.

Angelica Pastorelli Jan 13, 2014 3
Write or Play To Write or To Play? That used to be the question. Now you can do both at the same time. Introducing…
Publishing