From a psychological perspective, holistic dynamic theory subsequently serves as the fundamental foundation of human motivation. Of all preceding theories, his seems the most practical. 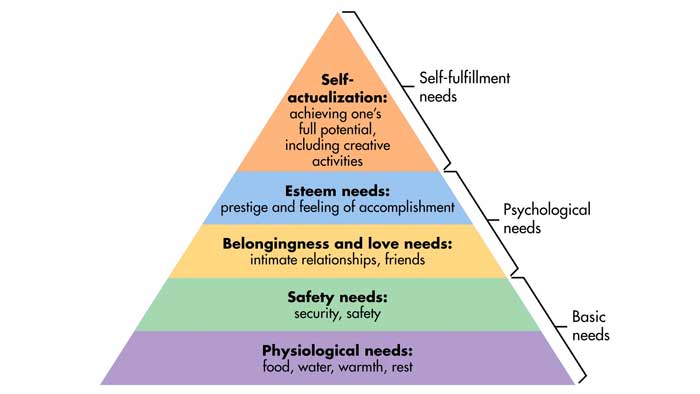 Self-Actualization defines the final phase of maturity in psychological development when a person maximizes human potential.

During this self-discovery, the person achieves true wholeness and becomes one with oneself as they realize their complete capabilities, or existential purpose in life.

Perhaps the most credible theory, Maslow accurately ascertains human progression, as referenced through several stages of classification based upon personal needs. Self-actualization emerges to fruition only when a person reaches all their personal needs, cultivating the values and virtues which characterize it.

Attaining self-actualization entails developing the extraordinary character which distinguishes them as a truly whole person. These B values, represented by completion, totality, uniqueness, aliveness, truth, autonomy, wholeness, embody the pinnacle of human motivation, or as Maslow described it, meta motivation.

When a person achieves self-actualization, they transcend all dichotomies and human contradictions.

Hence, self-actualization defines the human ideal, or humanity in its quintessential form. However, while Maslow’s theory overwhelmingly proves a sound theory buttressed by sound, substantive argument, it remains far from perfect.  Still, it contains one conspicuous flaw.

Due to its ambiguities, the cycle of human advancement regarding motivation remains predominantly subjective, determined primarily by one’s personal interpretation. Since people categorize themselves according to their own individual interpretation of the theory, impartial characterization appears virtually impossible.

Nevertheless, the formidable strengths of his theory overshadow any inherent weaknesses.

Maslow’s hierarchy of human needs categorizes motivation according to higher and lower needs. A person only advances after one completely satisfies the needs required by each respective stage. Represented by five echelons, each one assessing human motivational needs, his pyramid enumerates the requirements and descriptions which constitute each stage.

These needs range from physiological to self-actualization, including the intermediate stages of safety, love/belongingness, and esteem. Physiological needs include rudimentary survival needs, such as food, water, shelter, and clothing.

Most people in America surpass these basic needs. Unfortunately, the most impoverished people in every nation suffer such oppression which prevents them from advancing beyond this initial stage.

Once people partially satisfy their physiological and safety needs enter the love/belongingness needs stage of development.

People tend to become overly possessive of achieving love, affection, and require extensive attention. They may become desperate or dependent upon the need of others. Thus, such dependence prevents them from achieving the sovereign, self-sufficiency needed for personal development.

Thereafter, people advance to the esteem needs phase of development. Esteem needs require the development of confidence, self-respect, and competence in future pursuits. During this phase, the status stage of personal development, people aspire to develop their own personal reputation and status in society.

This stage limits not solely to personal motivations such as attaining self-prestige, but rather includes overcoming personal struggle, achieving mastery in personal challenges, and a sense of, “confidence” toward facing the world at large. These individuals stand along the cusp of achieving self-actualization.

According to Maslow, a person culminates in their psychological development when they achieve the final phase, known as self-actualization. Here, people finally realize their fullest potential, discover within themselves, true self-identity. It includes one’s personal fulfillment, recognizing, “one’s potential,” and a “desire to become creative in every sense of the word,” (Feist, Rosenberg, 282).

Such values may include, heightened perception, “acceptance of others, simplicity, autonomy, profound interpersonal relations, democratic character, philosophical sense of humor, creativeness, resistance to enculturation,” or rejecting conformity, and “love” in its highest degree, for humanity (Feist, Rosenberg, 289-294).

After all, what constitutes a truly whole self-actualized person? However, people determine for themselves the people, and quintessential qualities they exude, represented by self-actualization.

For example, one person might consider themselves or perhaps someone else a self-actualized person based upon attributes they possess, while another refutes their argument with contrary evidence.

Since this ambiguous, abstract concept of self-actualization, becomes subject to interpretation, and leaves room for varied opinion, Maslow’s theory exhibits an intrinsic weakness.

The vague criteria, B-values, and this concept of maximizing potential by overcoming previous stages lack sufficient detail for objective determination. Anyone may consider anyone self-actualized, when indeed inadequate information actually exists to substantiate such interpretations.

Yet, despite this inherent flaw, Maslow still endowed people with a strong scientific characterization which they may apply to facilitate self-advancement. It serves as a fundamental framework, or guide that facilitates personal development.

Thus, people decide for themselves where they stand in the hierarchy of human needs, and determine alterations regarding motivational behavior, environment, etc., harnessing such factors to fulfill their motivational ends.

Therefore, the strengths of Maslow’s theory overwhelmingly outweigh any weaknesses it presents, because all that matters remains how people perceive themselves and how others influence them to maximize their potential.

Thanks to Maslow, people recognize the barriers in their personal lives that obstruct personal development, and upon identifying them, seek advancement.

Marketing 101 In a Nutshell