A Soldiers View of Afghanistan

A Soldiers View of what is really going on. This young man is articulate and has a flare for colorful language, and descriptive prose, Scorpions, Chiggers & Sand Fleas. It is a great letter; a must read for every American citizen.

From the Sand Pit:
It’s freezing here. I’m sitting on cold hard dirt between rocks and shrubs at the base of the Hindu Kush Mountains, along the Dar’yoi Pamir River, watching a hole that leads to a tunnel that leads to a cave. Stake out, my friend, and no pizza delivery for thousands of miles. 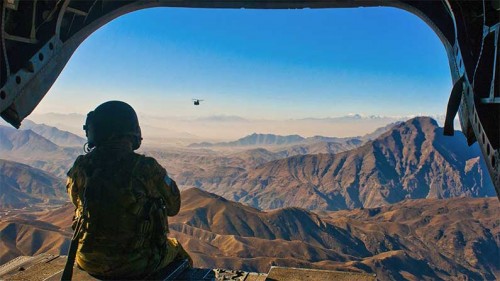 I also glance at the area where I am sitting every ten to fifteen seconds to avoid another scorpion sting. I’ve given up battling the chiggers and sand fleas, but the scorpions give a jolt like a cattle prod. Hurts like hell.

The antidote tastes like transmission fluid. The one truth the Taliban cannot escape is that, believe it or not, they are human beings, which means they have to eat food and drink water. That requires couriers, and that’s where an old bounty hunter like me comes in handy.

I track the couriers, locate the tunnel entrances and storage facilities, type the info into the hand held, and shoot the coordinates up to the satellite link that tells the air commanders where to drop the hardware. We bash some heads for a while, and then I track and record the new movement. It’s all about intelligence. We haven’t even brought in the snipers yet. These scurrying rats have no idea what they’re in for. We are but days away from cutting off supply lines and allowing the eradication to begin. But you know me; I’m a romantic. I’ve said it before, and I’ll say it again: This country blows, man. It’s not even a country. There are no roads, there’s no infrastructure, there’s no government.

This is an inhospitable, rock pothole ruled by eleventh-century warring tribes. There are no jobs here like we know jobs. Afghanistan offers only two ways for a man to support his family, join the opium trade or join the army. That’s it. Those are your options. Oh, I forgot, you can also live in a refugee camp and eat plum-sweetened, crushed beetle paste and squirt mud like a goose with stomach flu if that’s

your idea of a party. But the smell alone of those ‘tent cities of the walking dead’ is enough to hurl you into the poppy fields to cheerfully scrape bulbs for eighteen hours a day.

I’ve been living with these Tajiks and Uzbeks, and Turkmen and even a couple of Pashtu’s, for over a month-and-a-half now, and this much I can say for sure: These guys, are Huns, actual, living Huns. They LIVE to fight. It’s what they do. It’s ALL they do. They have no respect for anything; not for themselves, their families, or for each other. They claw at one another as a way of life. They play polo with dead calves and force their five-year-old sons into human cockfights to defend the family honor. Just Huns, roaming packs of savage, heartless beasts who feed on each other’s barbarism. Cavemen with AK-47’s. Then again, maybe I’m just a cranky young bastard.

I’m freezing my butt off on this stupid hill because my lap warmer is running out of juice, and I can’t recharge it until the sun comes up in a few hours. Oh yeah! You like to write letters, right? Do me a favor.

Bizarre. Write a letter to CNN and tell Wolf and Anderson and that awful, sneering, pompous Aaron Brown to stop calling the Taliban “smart.” They are not smart. I suggest CNN invest in a dictionary because the word they are looking for is “cunning.” The Taliban are cunning, like jackals, hyenas, and wolverines. They are sneaky and ruthless, and when confronted, they are cowardly. They are hateful, malevolent parasites who create nothing and destroy everything else.

Smart? Yeah, they’re real smart, most cant read, but they’ve spent their entire lives listening to Imams telling them about only one book (and not a very good one, as books go). They consider hygiene and indoor plumbing to be products of the devil. They’re still trying to figure out how to work a Bic lighter. Talking to a Taliban warrior about improving his quality of life is like trying to teach an ape how to hold a pen. Eventually, he just gets frustrated and sticks you in the eye with it.

OK, enough. Snuffle will be up soon, so I have to get back to my hole.

Covering my tracks in the snow takes a lot of practice, but I’m good at it.

Please, I tell you and my fellow Americans to turn off the TV sets and move on with your lives. The story line you are getting from CNN and other news agencies is utter bullshit and designed not to deliver truth but rather to keep you glued to the screen so you will watch the next commercial. We’ve got this one under control. The worst thing you guys can do right now is sit around analyzing what we’re doing over here. You have no idea what we’re doing, and you really don’t want to know. We are your military, and we are only doing what you sent us here to do.

“Freedom is not free, but the U.S. Military is paying most of your share.”

Send this to YOUR FRIENDS so that people there will really know what is going on over here.

P.S. Why would any civilized country want to bring these barbarians into their cities or states. To do so is total suicidal insanity!

A Long-Thousand Years Ago, There Was A Country Named France

Marketing 101 In a Nutshell

Charla Jones May 20, 2016 1
Practice Makes Perfect If you watch many sports, you will hear the commentators reveal the secrets to the success…
Featured