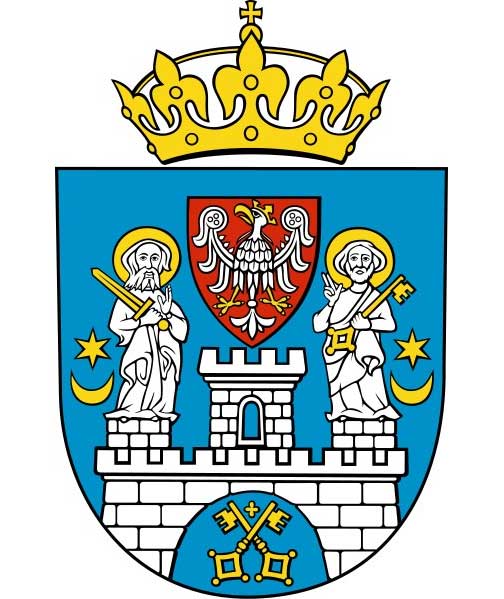 The Coat of Arms of the City of Poznań – it contains elements of the Keys to the City of Rome in the gate of the castle showing its Roman Catholic heritage and allegiance – with the two Saints: Paul (on the left with sword) and Peter (on the right with key) flanked by the Leliwa Arms (the six pointed star of Bethlehem over crescent moon on a blue field) and crowned with the Polish White Eagle and the Polish Crown. – The city of Poznań (Latin: Posnania; German: Posen; Yiddish: פוזנא or פּױזן Poyzn, Russian: Познань Poznan) has been inhabited since the Stone Age (about 2,500 BC) and was already a fortified settlement on the Warta (Werthe) river in the Bronze Age (about 1,000 B.C.) – the city was founded as such in the 8th century AD and received full city rights in 1,253 AD – its full name in Polish is “Stołeczne Miasto Poznań” (“The Capital City of Poznań”) and in German “Haupt- und Residenzstadt Posen (“Capital and Residence City of Posen”) reflecting its centrality in the Polish nation as one of the cities that can be Poland’s capital. – The name comes form from the Polish participle “poznan(y)” – “one who is known/recognized” – from the verb “poznać,” which means “to get to know” or “to recognize”.

See the bone of my hand, see the color return to my pale skin
See my lips, as they moisten, see my eyelids flicker, they open
The pupils dilate, I can see through the darkness, I have conquered sin
I have returned across the threshold of time, from darkness to world of men

One hand stretches, another grasps the edge of the stone
My heart is beating, I take a lung full of living breath
One hand stretches, I can feel the life in the marrow of each bone
The guards are fleeing, they are frightened of mere death

Behold the fire burning within my soul
Hear the words upon my lips, the tip of my tongue is truth incarnate
I am rejoined, the dismembered parts of my body are once again whole
I have come at the turn of the tide, to stand against all of fate

I drink freedom and wash my face in hope and truth’s defeat of death
Sing with me oh friends and comrades in our common quest
I am the sacrifice and the redemption, I am life’s promised breath
I stand up, and I will not now go gently back into the night to rest

Detail of monument of Polish soldiers of the Greater Poland Uprising 1918-1919 (Powstanie Wielkopolskie) in Poznań – unveiled on September 19, 1965. It is situated on the corner of the streets: Wierzbięcica and Królowej Jadwigi (Queen Jadwiga’s) near the historical park of Izabeli and Jarogniewa Drwęskich. The two figures represent the < powstańcy > – soldiers of the uprising – Officer with sword and private with rifle. The design project was by Alfred Wiśniewski (February 21, 1916 – January 18, 2011). The Uprising which started on December 27, 1918 brought about the formation of the 2nd Commonwealth of Poland altering the trends then at play at the Treaty of Versailles (French: le Traité de Versailles) after World War I. The significance of the uprising with the city of Poznań at its center and its impact on subsequent world events cannot be overstated.  Glory to the heroes of the uprising.