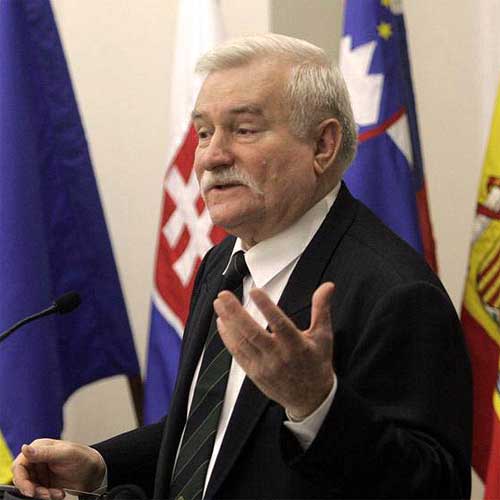 If you do that, you are manufactured, and that ain’t cool.
Manufactured cool is decidedly un-cool.
Most pop-culture examples of people who are cool
Are corporate-approved poll-driven creations of what is cool

BUT – few of those people are cool… in the way of Lech.
Even Lech’s last name is cool
Walesa – in Polish they spell it Wałęsa
With a bar striking out the ‘L’ and a tail on the bottom of the ‘E’

It suggests that he’s just loitering around being cool.
Leaning on that bar, at the tail end of the street.
His first name is Lech
It’s so cool, only the Poles can pronounce it right.

How cool is that?
Granted there were a whole bunch of people responsible…
…for bringing about the birth of Solidarity
The recognition that we are all in this together

They who worked tirelessly to bring down the evil horror
…of Communism and the Soviet system…
That’s cool, of course it is.
BUT – few of those people were cool.

Many of them were interesting and highly educated people
Some even had Ph.D. Doctorates, Master’s degrees and all sorts of fancy titles
Some were “cool under fire” but that ain’t the same as being cool
Others were fascinating and incredibly important, smart cats all.

They all deserve a lot of the credit for what finally took place:
…on November 9, 1989 – when the Berlin Wall came crashing down.
BUT – few of those people were cool.
You see this is a competition, this my friends is a race

For first place
I can count the cool ones on one hand,
Maggie Thatcher is cool, even if Pink Floyd disagrees
Ronald Reagan was cool

Even if the Liberals hate him, or maybe because they do
But both Maggie and Ronnie were in the West…
Pope John Paul II was cool, and great, just deal with it
So was Mikhail Gorbachev and Boris Yeltisn

For different reasons both of those guys are very, very cool.
Gorby is of course incredibly cool,
Just look at his head,
How cool is that?

In Russia, it is difficult to be cool unless you are the Mafia
In Russia everyone is afraid and cold, there ain’t time to be cool
And Alexander Solzhenitsyn remains Russia’s 20th century
Ultimate symbol of what it is to be cool, like Lech.

But in Poland, the center of the radical events
That shaped the worst of all, the 20th Century
And that finally brought the Communists to their knees
No one is quite equal to the coolness of Lech Walesa.

To lift the burden you are given.
But to be cool is also something completely intangible.
Lech exemplifies it.
Lech resonates it.

Lech is it.
He is a cool cat.
A cool Polish cat with a walrus mustache and working-man’s swagger.
Few people can be common and uncommon at the same time.

Lech Walesa ain’t perfect
And that imperfection,
That out-of-focus annoying thing about him,
That something that pisses off so many…

…of the white-glove wearing elite University educated society
…is what makes him a cool Polish cat
He’s the be-all of Polish cool.
I mean… he was an unemployed electrician who became President

How cool is that?
Malcolm X was cool
In fact few can deny the mark he made on the aesthetics of coolness.
The way Malcolm X walked, talked and sat

The way he looked at people
The way every photograph of him was undeniably only of him.
That made Malcolm X cool,
It also helped that he was a revolutionary.

And that lots of folks didn’t like him
He rubbed them the wrong way
With his attitude and his background
He was an ex-con.  He was a master articulator.

He was a man with balls.
That’s cool.
Lech Walesa is the best and most recognizable representative of Polish Cool.
I don’t know his taste in music, I don’t have to

His attitude is all Jazz, a national Polish Jazz
Improvisation from the street, wisdom of the common man.
Lech is the Polish everyman, that’s cool
Theolonius Monk’s idiosyncratic counterclockwise abruptness

A silence and hesitation born of the inner peace of knowing what to do
And John Coltrane’s dedication
A spiritual adherence to a tired and downtrodden past
A Polish past, a Slavic past, a shattered nation, an enslaved nation

That’s cool, that’s the Slav cool Lech walked and talked
Uncomfortable?  You ought to be, real cool is difficult to compete with
Lech is the Jazz-funk of Vladimir Vasilkov, why?
Because Jazz was forbidden, that’s why, Lech is Polish Jazz

How cool is that?
Lech Walesa is a fresh glass of mountain spring water-brewed-beer
In a room full of stuffy French and Italian sounding wines.
Think of him as inexpensive ale in a large pint mug.

If you want class go to a 5-star restaurant.
If you want to get drunk on the coolness of Polish Patriotism
If you want to understand what a Polish Catholic laborer is like
Get a beer with Lech Walesa

And just chill in the ambiance of the icon
Of Polish authentic revolutionary appeal.
He is our Che Guevara, our Georges Danton
Our Malcolm X and our Mahatma Gandhi all rolled into one.

They were cool cats living un-cool times.
Danton was so cool, they cut his head off
Gandhi was so cool he brought down an empire
How many bullets did they need to kill Che?

And Malcolm X was so cool he chose the numerical unknown for a last name
And then they killed him, that’s how cool he was
They couldn’t stand the light of his soul
Those were cool cats, like Lech,

Ready to take a beating and die for the cause
How cool is that?
Lech didn’t die, he’s alive and kicking
I’ll tell you, that so cool we Poles have a name for it

It is Lech Wałęsa cool.

Just Before The Dawn