A Shadow in a Forest 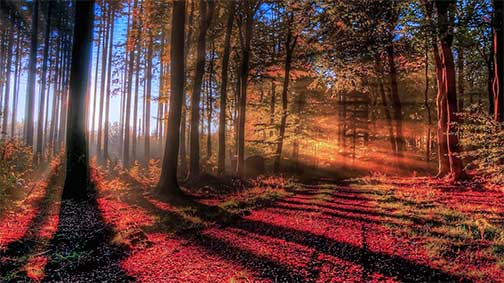 He is not close, but I feel his presence.
A shadow twists between trees in a
forest, as sunlight disappears.
A shadow stands as naked as a forest
waiting for longer days when
trees are about to bud from a warmer
light.

He told me his leaving was to follow his
own, shadow, but still he follows me as
I cross familiar land on paths trampled
by feet traveled for centuries, before me.

The trees have lost their overcoats and
they are scattered on the ground to
penetrate the earth, to root, to dig into
cold, but unfrozen ground.

I have warned him to keep away, to stay
beyond the forest. He follows.
His way is quicker, but he trips when he
reached a marble step hidden beneath
leaves of orange, yellow, and apple red.

A mansion once stood in this open space,
a marble home surrounded by tall trees,
and now steps remain as dead leaves cover
the entry to a time once lived, and forgotten.

I knew only a lost soul could place this
shadow on the path to stumble on marble,
and slow his pace. A soul who gave me
time to find my hiding place.

I watch as the sun begins to set behind
a mountain of tall trees, and I know
shadows disappear. Never trust your shadow
or another, for they creep upon the ground,
quietly.

I carry no weapon, and I do not have
strength to fight, even a shadow.
My mind plays tricks on me.

Years ago, I warned him before he became
a black curse, to stay away from paths
I crossed. My needs were not for his shadow,
for his shadow felt as empty as a winter sky
when the stars, hid.

Still he arrives, carries his weapon, prepares
his rifle to aim at the tallest tree – yet for
a second I felt a burst of air cross my ear
and push me to my right.

My feet tangled up in broken branches –
I am still breathing.

I crouch lower, closer to the wall of stone
until the midnight hour – when the shadow
leaves, as leaves, on a tree; a spring rain
will rid the path of yesterdays color where
a shadow walked.

He dropped his weapon where it would be
found; he thinks he is the only soul who
knows where a shadow sleeps.

This, another century and every night a
shadow scatters darkness on the
ground, or walks between naked trees to
scatter uneven lines.

Inside our mind, deep in our heart we
recall this shadow; when there was no
shadow, at all.