Countless stars shed light on the ocean, mirroring the shimmer of phosphorescence. Wavelets tease shifting sands beneath the silken surface, tugging, pushing, swirling. The sea advances and retreats like an uncertain army, its broken front line hesitant as it battles against the beach. Breakers ram and shatter over granite cliffs, foaming back to tirelessly continue their barrage.

The squid-ink sea lightens to dolphin grey in the pre-dawn. The increasing breeze ruffles the surface, creating mountains and valleys like a fast-forward movie of the earth’s creation; sliding plates of the planet’s crust, forcing up ridges that are weathered then washed down rivers as sand, to be compressed into rock and lifted again with the next tectonic shift.

An indigo sky morphs into an aura of aqua before the sun emerges at the horizon. Beams stretch from the conjuncture of air and water as if to beckon the flow from the river’s mouth. Along the crescent of golden beach, early dog-walkers and joggers press footprints as reminders of their passing, taking with them a silicone crust adhered to their damp skin. A tang of seaweed sharpens the air as the temperature climbs. 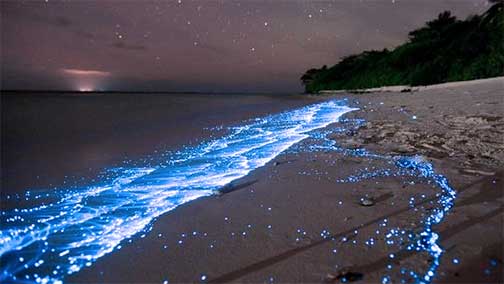 The warm sea evaporates, leaving behind sand and salt. Droplets mingle and combine, building into visible wisps of moisture. Clouds grow into dragons, transforming as the watcher’s imagination takes flight. Blowing in on the rising breeze, these fantastical creatures head inland, to later bleed their essence to the ground; rain creating rivulets, joining into creeks, merging into rivers, returning to the sea.

Children explore the shallows, collecting shells and pirates’ treasure. Castles grow from buckets and spades as collapsing channels drain the last of the high water from their moats. Squeals of glee erupt then tears fall as siblings squabble and snatch, monuments of dreams battered to be rebuilt by determined crusaders.

Surfers paddle out to the breakers to ride in on adrenalin and spray, lithely leaping or crashing ignominiously depending on their skill level and vagaries of the water. They turn and repeat their joy, oblivious of bruising or scratches. The sun radiates energy, invigorating those gambolling beneath its rays.

A fisherman hefts a dinghy against the sea’s grasp as it tries to suck his boat back to its element. Driftwood blocks his passage as he steps carefully to avoid stranded jellyfish. His struggle overcome, he props on a rock and shields his eyes from the glare as he looks out, out to what? The one that got away? A vision of lands afar? Maybe he spies a migrating humpback, or is searching for a larger vessel to take him off the deep sea shelf to hunt for marlin and tuna.

Someone calls and waves from the thinly-veiled shade of the she-oaks on the dunes’ edge, where knotty grasses dig their roots deep to maintain a grip against erosion. A seagull swoops, attracted to a possible free meal. It lands with wings folded like the best man at a wedding, strutting with hands behind his back at a loss of what to do in formal attire. A terrier defends her territory and chases the bird away, but only for a moment. The enticing aroma of freshly cooked fish-and-chips is too taunting to worry about a mere dog.

A swimmer emerges, shedding water from shoulder-length tangles and goose-bump skin, the increasing wind tickling her hairs on arms and legs. Darkening clouds intensify the cold. As the tide turns, people depart as if swallowed like the rock pools beneath the waves. Thunder reverberates as lightning cuts the evening into fragments. A lighthouse blinks its warning from atop the cliff. A sudden storm rips up the seabed and rages against the coast. Breakers harangue the fragile boundary between land and sea.

Inland floods pour to meet the onrushing ocean, ripping out sandbanks and kaleidoscoping the estuary in chaos. A derelict jetty is torn from its stilts and another metre of beach erodes, but nutrients flow seaward to feed the minuscule life at the bottom of the food chain.

Blown out, the last clouds scud away. Darkness hides the destruction as the constellations track across the sky as if they, not the earth, are moving. Then the moon rises, adding its own rhythms of months and seasons to the planet’s dance. The pale glimmer reveals the altered seashore—forever in flux yet constant in its permanence.

The divide between land and ocean has existed since the formation of the prehistoric continents that roamed the planet’s surface. Rising sea levels, crumbling cliffs, silted river mouths—the coastline will still exist, in some form, for aeons to come.