The Road to Broken Hill: The eagle scans the arid countryside as he soars in effortless circles, wingtips dipping to adjust his height with the thermals.

Saltbush and spinifex sprinkle the scarred ochre surface below. Tumbleweed blows along its lazy path, stopping to rub against rock and shrub before rolling on with the next breeze. A skink scuttles from shade to sun, sun to shade, darting, wary, ever alert. 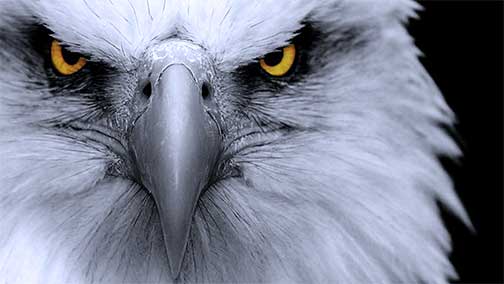 The Wedge-tail swoops, claws and beak open. Too late; the reptile has ducked into a crevice. With a ripple of wings, the giant bird regains altitude against the azure backcloth.

Not a cloud mars the pristine sky, not a jet stream, not another bird. The shimmering heat is even too much for the clouds of tiny flies that will swarm come dusk.

A pitch-black line bisects the plains. Metal objects race by in a blur, belching noxious fumes, dazzling and blinding, before disappearing with a roar. Another projectile shoots along the hot bitumen, never varying from the path, never slowing.

The eagle continues to watch, eyes sharp for that flicker of movement that might mean a meal. The shadows lengthen, grotesque shapes draped like a shroud over the pitted earth. Red and white lights streak along the darkened path, the last rays of day lost below the horizon.

Unable to hunt any longer, the eagle extends his wings and beats a slow pulse towards a lone sentinel tree. Long dead, its bare limbs hug a tangle of branches into a nest. A female and chick await the hunter, to be disappointed and remain hungry. Feathers fluffed, they snuggle deep and huddle together for warmth as the cold night air settles around them.

Alongside the bitumen, rivulets of dew moisten delicate green shoots. Kangaroos nibble when not keeping watch. Heads up, ears a-swivel, their noses twitch to pick up any hint of danger. The rush of wind and noise only a tail’s length away means nothing to them. A large buck bounds towards a young doe. She has her joey to care for, and another in the pouch. She hops away.

The male kangaroo leaps nearer. Startled, the female dashes in the opposite direction, not looking where she is heading – into the blackness that transforms to white. She stops, blinded by the glare. It is the last thing she sees. The young joey bounds in lost circles. Returning to sniff his mother, he is confused as she doesn’t respond. Squatting next to her, he is unsure what to do. The large male has gone.

Images take shape from nowhere as dawn unfolds. Tree shadows claw back to their roots as a shimmer of heat shivers the mirage. The eagle fluffs out his wing feathers and stretches his full span. He launches from the edge of the nest. A few laboured flaps bear him back into his kingdom, soaring high above the plains.

As he glides, he spies a smudge of dark and an irregular mound where before there was nothing. Circling lower, he approaches. There is plenty of fresh meat for his family today.

Jack Eason Aug 27, 2012 5
If You Can’t Stand the Heat Over the past four years, the number of fellow writers I have had conversations with…
Science