“Queen Esther” (1878) by Edwin Long of the Royal Academy of Arts (born 12 July 1829 – died 15 May 1891), an English genre, history, biblical and portrait painter. She is considered a prophet of the Old Testament along with Mordechai – and both are part of the Purim tradition. Her name is derived from the Persian word for “star” (setareh) – she is viewed by some Biblical scholars as the subject of Psalm 22. 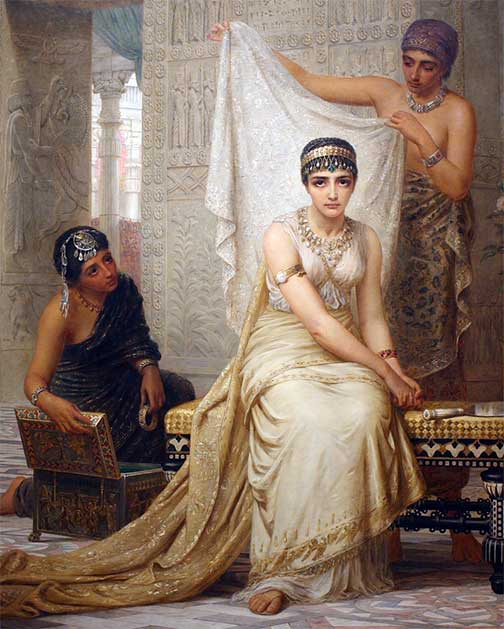 Out of the swirling chaos I cast the red dice
Of fate and they roll to a stop, my number held
In pectore – quantum fluctuations singled thrice
Out of the mix and twenty, time and space now meld

Esther. “But I am a worm and not a man,” feast
It is a righteous dinner this Purim, to life
We who walk through the whirlpool of evil, lives leased
From the great forgetting into the future, a knife

On which we balance despair and all gratitude
That for which we would dream and die, changing the cards
Well cooked piece of hope, spiritual cognitive food
And what remains of lives composed of waste and shards

Mordechai. “The poor will eat and be satisfied.”
Somewhere in the past, little boy cries himself to sleep
Hush my child, the bombs will stop, again mother lied
The well of oblivion and change is crimson deep

And so at sunset I stood at the gateway’s edge
Past, present, future all danced under the full moon
Then we ate dinner, drank wine, away from the ledge
Stepping carefully on the wounds of the heart, soon

It will be time to blot out the names, but not yet
For now we form a collective sort, something new
Casting the lots against the red dice of free fate
The masks slip, we are not legion, we are the few