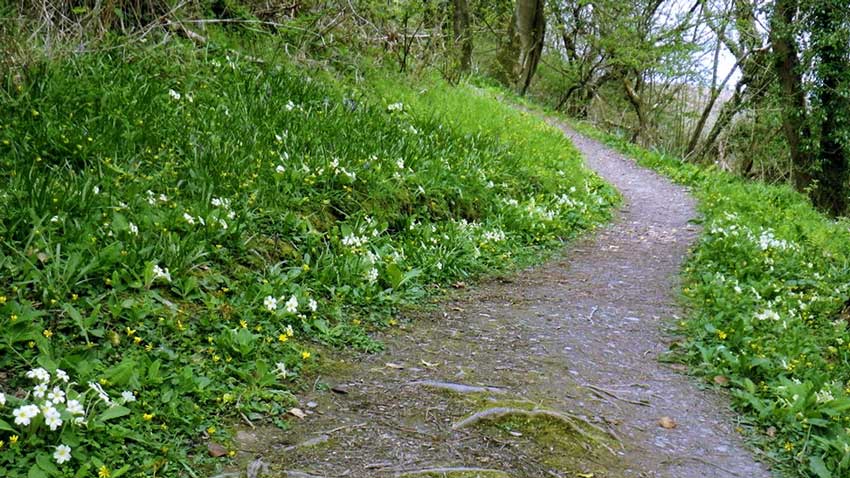 
Three fifty-foot lots seemed far, so distant
to a five-year-old.  A five-year-old; gentle
meekness of a child, innocent yet filled with
fear – which lasted through the years.

A child tolerates what is learned, gives
permission – to elders – although a candy
man reacts to frayed arteries on a Primrose
Path; giddiness, twitching, twisting a
common leaf then ripping it to shreds.

Misbehavior, common to the onlooker –
perhaps today labeled attention deficit
disorder – some mental block – or far too
shy – or far too friendly – a child smiles.

A child knows the arteries to Primrose Path.
Loose stones are kicked, heads look down,
and the smile gone – for a while.  The distance
a child walks pollinates a vine, layering
failure – as a path brightens in a new lip of
daylight.

One day a child full of grace, this tiny
angel – wings carry the child above the
wickedness of wrongdoers – when simple
wings were observed as naughtiness
inside – full of sin – inside – anger builds
as a child walks a Primrose Path.

Children learn to behave and do as one is
told, even if words string webs where one
is trapped by personal damage – unlike
thorns on bushes.

An angel has no capacity to tell or ability
to convince, unskilled talent;  a child
remains inside a capsule, a personal
space where words are muffled – then
heard as whining –

Blind dishonesty becomes a way of life
clouded by destruction but to one so
young what is destruction but a broken
toy – or ice cream falling from a cone: so,
the silencer still reins. . .

Why didn’t a child run on Primrose Path?
The silencer to a child is a clown; a
round face, one who smiles, cheers
and praises those who play his game.

A false affection, unknown to a five year
old who believes in clowns and grins.
At the end of Primrose Path the silencer
waits, an opened door, peacock feathers
on a wooden floor – hallucination will
play tricks – and everyone is watching
calling out your name.

The lady only next door, close to a clown
known to have mental problems, and
her only daughter killed crossing her
Primrose Path.

All around children fear the lady on the
porch who rocks back and forth, hands
out popcorn, laughs, and calls your
name to come and sit for a while.

All the time the evil lurked next door.
Next door where new gifts are given –
and no one hears a whimper, and tears
dissolve – what was that? A child thinks.

Another time – a story stale, and those
living near Primrose Path love to watch
a belly jiggle, when someone laughs.

The poor, and needy, accept wrong
doers, denying any claims as false –
as the silencer inside stone walls
wallowing in personal wealth steals
more than money, more than pride.

His soul sold to the devil before his
life became a prehistoric charge
plate, his commission, offers of
penny candy to a child.

Proprietors knew the cost of being
poor, and so they learned to be
in business for themselves, a child
for collateral.

No window shopping on this path,
no neighbor would betray a friend
one trusted – no neighbor knew
about the piles of wooden boxes
where a silencer played.

No laws protected children from illegal
operations – a child stealer working
his own rackets – bargaining with a
child’s mind.  His assault became his
sexual possession.

No one talked about the end of
Primrose Path, or believed any
child should walk with fear – too near
to be a prisoner: he hands out a
popsicle, or a stick of gum.

Those who walked the Primrose
Path left names etched on a brick
façade.  Those who played on a
Primrose Path, kicked the can, jumped
rope, ran to play hide and seek, and
skinned their knees.

Those who played at the end of
Primrose Path, never spoke.

It remains inside like a piece of metal
rusting, corroding any possibility of a
future – children have been torn,
or crumbled as a piece of used paper.

A silencer warned – all hell would let
loose – if a child spoke.

A neighborhood praised the silencer
as if a prince among the paupers
bringing gifts to thank him for his
business, and sharing drinks, or a puff
on a cigarette; shown as a home movie
on a wall.

His world of destruction had no expert
witness, or media, or tip-off – and he
knew the preacher.  A silencer told
his own stories, but never revealed
his true tattletales.

Memory chases without real pain
or formal cause; no reason to kill
a child’s recollection of a simple life,
and a child closes lips, tight as a
clam trying to survive without water.

In front of you as if you knew blacking
out as black and white TV.

A parade down primrose path; a beaten
path, ruts and grooves and arteries
carried on informally: a hobby horse
occupying space on top of boxes, near a
festival of color, near feathers of a peacock,
his hiding place.