It has changed so much from when I lived there in the early 80s,
West 70th near Central Park West, an apartment like a closet.
Cockroaches were smart and fast.
Memorable, the pace of the trek to work in the morning. 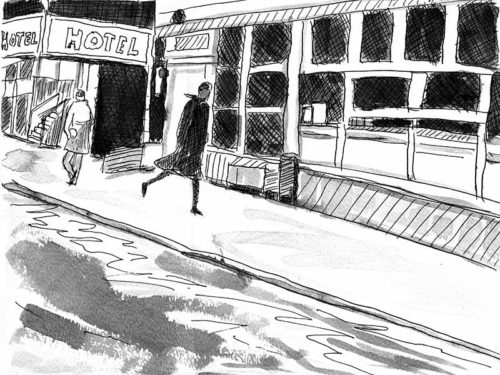 On cue doors opened, out came a flood of people, droves.
Buildings towering over us.
I was alive and in this mighty city.
To be fast and intent, the NY strut.
You could never see and do it all.

Chock Full of Nuts coffee shops, Zabaars, the Met, MOMA, and the only place I ever saw a crowd of pedestrians overpower a cab driver who hesitated.

Mr. Lennon called it the new Rome—all roads of culture leading to its environs.

The smells, kinda old and dirty, but somehow wonderful and thrilling.

The people could be indifferent and sharp, but in an emergency, they all pitched in like a reflex.

The setting sun in the west, such glorious colors over the Hudson.
The rising sun from the east, the race was on, a new day was here.

The brownstones, the stoops, winding stairs leading to those quaint basement apartments, lower east-side street vendors selling huge 25 cent pretzels, Grand Central—all aboard, Penn Station—Jersey here we come, ethnic markets with green and white awnings and yellow Checker Cabs charging up Park Avenue, signs saying pizza by the slice, all the while a homeless man sweeps the sidewalk, his beat-up
broom dirtier than the trash he whisks.

A bum about to pass me commands “Give me a dime!” I give it to him, why I don’t know, must have
been the authority in his voice.

The winter’s wind cuts to the bone and cowering behind a corner I wait for it to pass so I can walk
another block before freezing to death.

Looking over my shoulder there are 6 others doing the same
thing. I declare “You guys are crazy to live here!” they just laugh. The wind dies and we bolt another
block before sheltering again.

They liked it so much they named it—twice I’ve been back to visit and now I daydream that maybe,
someday…I’ll go back there…to live.

Perfection – A Novel by Kathleen Wade

The Bloom Of Youth