Nagorno-Karabakh is historically an Armenian part of the Caucasus region which until 1991 was part of the Soviet Union Communist empire. 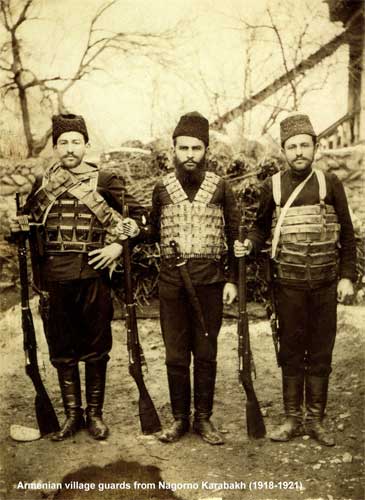 Have you walked my valleys?
The trees on my hills are full of the soft juice of life
The leaves on my trees are full of the memories of strife
The dew drops on my leaves are the tears of my nation
I am Armenia

Have you prayed at my ancient churches?
The stones of my walls are full of the living resolve
The tombs of my ancestors into the dust of time dissolve
The echoes in vaulted chambers are the songs of my nation
I am Armenia

Have you sat under my vast brooding sky?
The clouds above my mountains are the prayers of the past
The air you can breathe there is of the strongest souls cast
The ambiance is as of iron and steel, the sinews of my nation
I am Armenia

As a result of the Nagorno-Karabakh War, Armenia lost about 6,000 people and suffered 25,000 wounded and Azerbaijan lost between 25,000 and 30,000 people with about 60,000 wounded.  Azerbaijan had help in the war in the from of volunteers from Afghanistan and volunteers from Chechnya.  Armenians were the only nationals who fought on the Armenia and Nagorno-Karabakh side.  Armenia and Nagorno-Karabakh are half the size of Azerbaijan in both geography and population, so the losses were more or less proportional on both sides in percentages of population.  As a further consequence of the war countless of people were displaced and missing on both sides.

The Nagorno-Karabakh War ended in 1994 with the Armenian nation-state securing de facto, geographic, military and political control over Nagorno-Karabakh along with a conduit that now connects the two sides of the Armenian nation state.  The state of Azerbaijan was successful in preventing the international community from recognizing this state of affairs as legitimate.  Given that Nagorno-Karabakh has always been Armenian since quite literally the dawn of recorded history – the Azerbaijani position is a farce meant to secure the gains of the Soviet era.