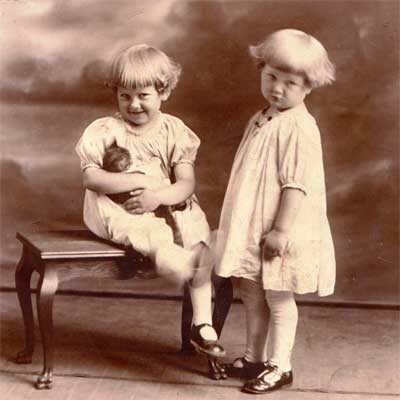 all dressed in white – flower girls,
soon – they would reach the end of a wedding
path –

watch as a bride and groom joined together
in love
at the old fort,
at the end of the road.

Two little girls – wide grins –
stare at what nature brings – as
sand began to cross each face,
to leave speckles of brown on white lace.

Molly searched for sea gulls, not
one could she find.
Wind lifted up the sea, poured water
over rocks – then onto their path.
Two flower girls dashed toward their
Aunt Maggie’s house –

stood still to stare at a wedding gown
blowing in the wind –
“Mine is blowing too” –
Maggie Mae exclaimed.

Rain began mid morning, now
close to noon – water slapped
against blue shingles on Aunt Maggie’s
home – while inside a bride
cried salt water tears.
Those two girls were never missed,
they skipped toward the inlet –
matching gowns – holding baskets filled with
roses –
Flower girls, ornaments at a wedding –
they never worried about their satin and lace,
never worried about roses, or the path
they would take.
As they ran from Aunt Maggies they
laughed, and continued to laugh at her
struggle with a wedding gown.
A gown now twisted by a storm, flying
like the wind.
Little John the ring barer, searched for
his dog Pat, he knew Pat could swim in
deep salt water – but no one saw John
or his dog Pat since the storm blew close
to shore.

Aunt Maggie double clipped
her daughter’s wedding dress to white
sheets – then – felt a southern wind –
A wind twisting her around.
All those words from those people on

the other side of the inlet, those mainlanders
tell’in people to stay
far away from this island in a storm.
This – was her daughter’s wedding day –

If they came, they could stay.
Her husband left to check the bridge,
returned – disturbed – yet plans were made –
and his daughter’s dress had finally dried.
So sand was shook from satin and lace,
cleaned up for her wedding day.

Maggie and Molly brought along Patty Anne
a rag doll with one blue eye the other brown –
Their Mama called them twins, just two
strange eyes.
One tugged on one arm, one the other
then a gust of wind ripped ribbons from
their hair. . . a doll in need of repair.
Two flower girls disheveled – yet both
walked to that ole bridge – when Maggie
she picked up a bag of rice from the
bottom of her basket –
another gust of wind tossed them side
to side –

now they opened up a burlap bag –
as rice flew into the air – landing in their hair.
Yellow rice flew toward a yellow sky –
Yellow rice twisted and turned just like
a brides gown pinned to a clothes line–

Grooms arrived to walk the narrow path
to a fort of stone –
Tuxedo’s now lined with sand, pants –
flapped against their thighs.
They mumbled to each other, “This old fort
still stands, it’s taken many a storm.”
Once again the little girls arrived at the ole
fort to play near giant waves –
They never worried with few petals of the rose
or the ribbons left to the wind –
water rushed above giant boulders
of black stone –
at the entrance to the fort,
were gobbled up in white foam – as
sea gulls feed –
Chairs began to fly as rose petals and rice,
while guests still walked the ole path –
–         now of mud not sand –
–         men’s hats flew out to sea –
women clutched theirs – between bended knees.
Eyelids cried as sand flew -hair once
proper – clothing too, now similar to a
bride’s gown caught between two willows.

Few heard the organ as it played –
but a lady in white and her maids
made their way down a single road
no longer dirt but puddles of hard rain –
her wedding veil flew toward a green sky.

A beach no longer seen – waves hitting
walls, rocks, and splashing up reaching
family and friends –
Friends determined to see a bride walk
by her father’s side.
Trees lifted from their roots –
“You see,” Maggie whispered to her sister,
“It’s Mama who is searching.”
Wondering why two little girls were not walking,
tossing flowers in front of the bride

“Why is Mama screaming,” Molly asked.
She never heard her sister  –  a fog as thick as
Grandmas pudding covered up the fort.
“We are here,” in unison their voices shouted
when ever a visitor arrived –
been years since Mama stopped her look’in
and only cried.
Every year two little girls return to celebrate –
leaving flowers on black stone – one etches on
the sand,
“We were little, two little girls, too small
to withstand the power of the wind. . . which took
us -held each other’s hands, turned us in circles

like the rice
in a burlap bag.
Everything still washed, away.
Just like big sister on her wedding day.