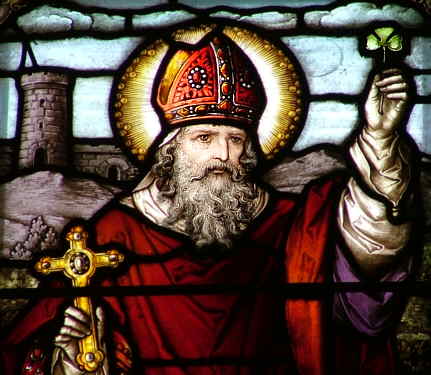 Introduction:
There was of course no tobacco or glass in pre-Saint Patrick Ireland that we know of.  And whether pixies and leprechauns exist is as much a matter of debate as to the nature of Christianity and the real powers of the Druids – but some leeway has to be made for poets – otherwise we’d be historians, not bards.

I include a glossary below to aid in the strange words I employed.  These words and the poem that uses them give away much of the feelings I have for Celtic culture which over the years I have found is close to my more native Polish culture.

That the two nations of Ireland and Poland also share in the Roman Catholic faith is to me just a great completion of a long historical cycle.

One that connects all the peoples of Europe from the South Western region of Spain and the Mediterranean nations of Italy and Greece in the South, to the Caucasus Mountains in the South East, the Baltic Regions in the North East, through central Europe’s Poland, Germany and France, the Northern Scandinavian regions all the way to the North East in Iceland and finally in the West, in the far green West of Ireland.

The rain that fell was the waterfall of sheer exhaustion and tired eyes
A Druidic blessing of engaging water nymphs and hidden lies
The sky had shed her tears of final hanging droplets of beauty
Giving up the weeping wastes owed to God, country, and duty

The Queen Monarch bowed in recognition of the rights of men
“I knight thee a protector of the forests and a defender of women
I elevate you to the lofty heights of love and honor, and right
A privilege for the lord, to cast with his bravery a luminescent light”

The phakelos of wood crackled in the fireplace with pleasure
Gifts of the woods, given like the greatest of all treasure
And I looked out the wet glass of the windowpane to see
If the veil of rain had lifted, if the way was clear to me

My heart had lifted its beating self from its dreary feeling of malheureux
The Druid knocked on the door “How do you do?”
I let him into the warmth of the abode I called home and hearth
“Please excuse the humble trappings and the good earth,”

But he was unperturbed, his cloak was moist, he was afire
“There is a visitor in our parts, he speaks of desire,”
I looked for a chair, perhaps for some wine, but none was to be found
Then I kicked the dirt that was soft with moss on the solid ground

“What is his name?” I asked when the pipe had gone out
The rain was still falling, the sky was still as sad as if after a mournful bout
“Quatrickas, he seems so iomlán de shaol if you know what I mean
I smiled, I had the gift, and the Druid knew well that I had already seen

“Tell him Abaris mac Máta welcomes him here as he welcomed his kind elsewhere
Tell him the cycle is ending, and a new cycle begins at dawn, all is shadow and faire”
And the Druid left and I was left with my brooding thoughts alone
I pondered on it all, and took out my black polished meditating stone

With the edge of my finger marked the Blonde Rune of forgetting, the past to seal
And the whisper of Járnsaxa made a szelest in my heart, a light soft appeal
The rain stopped all of a sudden and stepped out into the grove
Shadows had scattered, the sky’s eyes had dried all of a sudden, I saw a dove

I could hear laughter up the pathway to the gathering of men and ravens
And singing could be heard, bards sang of beautiful white-clad maidens
The light had cleared the clouds above me and I knew the moon was gone
Gone from the night to come, and from the hearts of men looking to the sun

A rainprism came down at my feet and with it a leipreachán with a pint of ale
“What say we drink before the Christians make all the cheer go stale?”
I laughed hard enough to make the birds scatter and fly
All feeling of dark doom and dreariness in me did die

Wee little folk came out of the holes in the oaks to see me so cheerful
The lad with the beer was already quite drunk and delightful
And hand in hand the piskie and I walked into the woods far from the isle’s edge
Till men forgot our names, and the path was grown over with a green hedge.

Fagge – Middle English for “fag” – as in something to stuff in a pipe and smoke, like tobacco.

Iveriu – a root word closely related to the words Īweriū (a proto-Celtic word for Ireland which evolved into Éire, a traditional name for the isle); Iverni (in Greek Ἰούερνοι, Iouernoi) – the first people of Ireland; Iveria (Georgian: ივერია – Caucasian or Eastern Iberia: in Greek Ἰβηρία – the Caucasus region on the Eastern shores of the Black sea, corresponding to present-day Georgia and Abkhazia);

Ancient Greek: Ὑπερβόρε(ι)οι, Latin Hyperborei) the lands to the North of Thrace serving the North Wind: Boreas (Βορέας, Boréas) – “where people lived in complete happiness and had extraordinarily long life spans.” – at least according to the Greek historian-adventurer Herodotus.

Járnsaxa – a giantess of the Norsemen, lover of the Germanic Norse God of Thunder: Thor.  The Whisper of Járnsaxa (Járnsaxa Runa, Szelest Jarnsaksy) – the Blonde Rune – the Sign of Yus (Znak Jusa) – an obsolete Cyrillic character used in North Eastern European (in the region of Finland, Lithuania and Belarus) associated with the pagans.

Leipreachán – The Irish spelling of Leprechaun

Phakelos – Greek for faggot (φακελοσ, Latin fasces: bundle of sticks) – as in a bundle of wood.

Piskie – The Celtic spelling for Pixie – a small elf, usually cute and adorable, very similar to the Slavic Krasnoludek (a kind of small Slavic gnome – also cute, from the Slavic word “krasny” meaning pretty and “ludek” meaning little person) – the Polish word “pysk” means “mug” as in the mouth – and “pyskować” means to mouth off, or to talk back.  Children as we know talk back to their parents – thus both Krasnoludek and Pixie correspond to the idea of children (pretty little people) who talk back.

Szelest – Polish for “whispering rustle” – as in the phrase “szelest drzew” – the rustle of trees.  Drzewo (Polish for “tree”) and Druid share the same etymological root.

LV Gaudet Apr 22, 2011 3
Twilight - Review For my second book review attempt, I chose another series by a well heard of and much loved…
Publishing