On the 70th Anniversary of the Japanese Attack on Pearl Harbor. 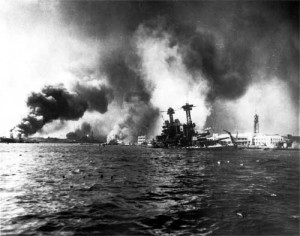 The eve of the immaculate was as peaceful –

…as the sea, though already in flames was the earth

Higher, above, over, the machine, the cursed tool –

…of man’s capacity to excel, to wage death –

…struggle to work in the zero hour, ships of war –

…on a dark mission from the maiden’s rising sun –

…lightning to give birth to pearls, waves crash at the door!

For what is life if not evil, done man to man?

Infamy, on edge of empire and republic,

Inside a peaceful island, a raped concubine

…and the whole world falls under the crimson moon’s sign!

Pele was insulted, then she wept, her tears a spring,

For God has servants who are as the rain, and free…

We have not forgotten the assault, that morning,

Though seven decades is our forgiveness decree.

Perhaps in time, the rawness shall give way to waves;

Kilauea had not seen such conflagration,

Yet yesteryear’s moon and sun shines on common graves,

May words be made flesh, immaculate in nation.

I mourn the dead, their souls safe in final harbor;

Pearls of great price, honor them for what they died for.

Getting Too Darned Big