Flag of the Résistance

The Résistance was the name of the French Underground during World War II  – as its symbol it used a French flag that differed from that of the French Vichy Government which had sided with the NAZI invaders.

That flag – the flag of the Résistance was chosen by the leader of the Free French – General Charles de Gaulle (November 22, 1890 – November 9, 1970) and it featured superimposed over the French tricolor of red, white and blue the Cross of Lorraine (Croix de Lorraine).  The Cross of Lorraine was an ancient symbol carried by the original Knights Templar – who were also mostly French – in the Crusades at the behest of the Patriarch of Jerusalem who alone had the authority to grant its use. 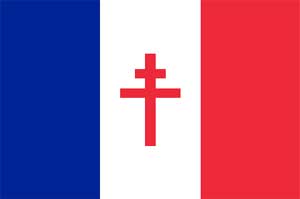 The quiet is always a roaring prelude
For the tempest to unfold, fate needs patience
Exhaustion always comes before an awakening quite rude
Drained by stress and hurry, our guard is in abeyance

Be mindful then of quiet times most of all
Never let your eye lids droop with sleep
The enemy will strike where you do not expect the axe to fall
And lulled by peace and quiet, your reaction off, your cost will be steep

There are these tiny oddly shaped nooks
Dimples in negative space and positive time
Places left over in-between concrete office rooks
Moments unaccounted for, too small for a dime

Pixies could live there or wee little Elves
Dust usually does, a lost paper clip, a missing label
Be careful, these are the places where the fabric of time can most easily rip
For “In the beginning was the Fable”

The Scientists will tell you all this is nonsense
A God of the Gaps, a kind of invisible friend
But I know that the quiet places are dense –
…with pathways to Pixie and Elf land

Walking on them is always fraught with danger, anxiety
Ridicule awaits you, for that which is hidden –
…is also invisible and full of false-truth-duality
Unwelcoming to the casual visitor, or the curious one who’s unbidden

But what if you’ve been invited, what should you do then?
Should you say: I’m a grown up, I have no need of fairy tales?
Should you dismiss the whisperings in your heart, echoes of when you were ten?
Should you not graciously accept the quest, follow the path from wherever it hails?

A bird winks at me, a flower tilts my way
You interpret it as mere chance, chaos and random events
Yet for me it is fate and fortune at play
It’s like the value placed in useless copper cents

Economically unsound, a waste of effort
Disposable, so much so you won’t even pick one up off the ground
And yet, each penny is a memory of a sort
A stamped reminder of the price we place on the absence of sound

Do you hear the silence as it loudly whistles its existence?
The echo of forgotten spaces, gaps in-between the rocks of reality
That’s the soul offering up a valiant résistance
To the march of progress and relentless banality

I refuse, I rebel, I object to be called a lunatic because I believe
The insane ones are the deaf and blind rationalists
Who cannot, will not, adamantly refuse to conceive
That the heart has chambers unmapped by cardiologists

And in one of those hidden rooms in the human heart
There is a bookcase of old dusty paper tomes written with fountain pen
God lives there, hiding out from the census takers, there he plies his art
Writing Myths to live by, conjuring up the humanity of petty men

A coda to the defiance of the mind against enslavement
Love is a sword raised by Spartacus, hope is a shield
With the blade he plunges into the depths of your copper cent
Making a penny worth more than a bank with cash filled

But it is across the bridge of truth that the heart walks beating
A tiny space carved out of time, of this universe, on the outside
There we defenders of the soul will have our war room meeting
And on the waves of silence, God will take the insane and hide.

Motto: “When the clearest of my destines, apart / In silence brings to light a broken heart.”  – Paul Valéry, La Jeune Parque (The youngest of the Fates). – Jackson Mathews translation.
Line 16: – Paul Valéry – “On Myths and Mythology.”