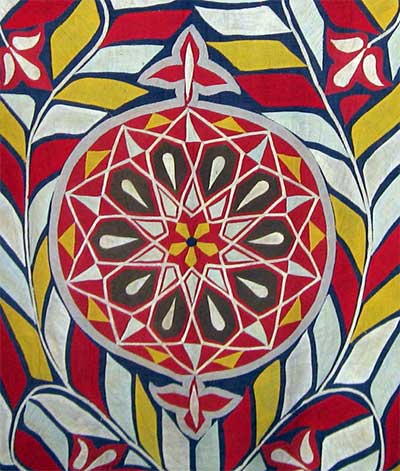 As the first born to the Semitic family
A was originally a picture of an alef or ox, the
Agricultural energy that was rotated twice until
Alpha loomed up in the Greek psycho-scape even before
Adam became the chosen father of all Europeans close to
Athens, where Apollo had acupunctured wisdom and knowledge into
Aristotle, the intellectual ancestor of modern man, who inspired
Alexander to make the first effort of globalization, which did not reach East
Asia, the land of Ah Q’s, the largest hotel for
All travellers until centuries later, but it is
Atomic bombs that will blow up all our pasts and send us through
America to a higher civilization, where the drop of an
Apple is to enable us to fly to the other side of the universe
Along the cosmic string as
Africa, the heart of human darkness
Awaits for Buddha, Jesus, Allah or
An other unknown author to come and rotate for the third time
A scarlet letter of
A
——————

first, a curved 1 from Indians
then, it was twisted until it became an S
ready to seduce, re-presenting itself like a 5
before the Arabs connected
her two closed circles
piling them one above the other
as if to round up
all sudden Chinese fortunes
—————-

‘Wait a while!’ Mother would shout, ‘they say
There might be more showers this afternoon.’
So I recalled, from time to time
How he would turn a deaf ear to her
And continue, dragging out quilts
Sheets, pillows, blankets, padded coats
One pile after another
Like moving forests
Hanging them on thick ropes
Tied to deformed poplars or lamp posts
‘Not again! This old man of mine just wouldn’t
Want to waste a single ray of sunlight.’
And remembered, for nearly half a century
My dad had tried each time to empty the whole house
And sun-wash everything, more like a grandma
Than like a father, even during the Cultural Revolution
Now realizing how I have been haunted
By his stark image, smiling, in blue, ever since
He nodded his head to Mother for the last time
About 5 pm on January 2 last year
I find myself choked again with gratitude:

Fate-Forecast
– Believe it or not, the ancient Chinese 5-Agent Principle accounts for us all.

1 Metal (born in a year ending in 0 or 1)
-helps water but hinders wood; helped by earth but hindered by fire
he used to be totally dull-colored
because he came from the earth’s inside
now he has become a super-conductor
for cold words, hot pictures and light itself
all being transmitted through his throat

2 Water (born in a year ending in 2 or 3)
-helps wood but hinders fire; helped by metal but hindered by earth
with her transparent tenderness
coded with colorless violence
she is always ready to support
or sink the powerful boat
sailing south

3 Wood (born in a year ending 4 or 5)
-helps fire but hinders earth; helped by water but hindered by metal
rings in rings have been opened or broken
like echoes that roll from home to home
each containing fragments of green
trying to tell their tales
from the forest’s depths

4 Fire (born in a year ending 6 or 7)
-helps earth but hinders metal; helped by wood but hindered by water
your soft power bursting from your ribcage
as enthusiastic as a phoenix is supposed to be
when you fly your lipless kisses
you reach out your hearts
until they are all broken

5 Earth (born in a year ending in 8 or 9)
-helps metal but hinders water; helped by fire but hindered by wood
i think not; therefore, I am not
what I am, but I have a color
the skin my heart wears inside out
tattooed intricately
with footprints of history
—————–

Seeds of hope, seeds of love
Deeply planted since last winter
In the fertility of
Dreams, expectations
All come into blossom
In every heart beating against sunlight
On every face beaming with smile
At every twig reaching into the sky
Just when leaves grow fullest, freshest
Before they begin to fade, or fail

Come, come to the open fields
Let’s embrace most daylight
Of the whole year
In this northern hemisphere
Where we can stay young, younger
Enjoying our honeymoon
With the sun, with light
With warmth
Instead of cold darkness
That is dominating the other
Half of the world
—————–

Stretching its hair-like limbs
As far as it can
The ant embracing
The tallest Douglas tree
In the forest
Attempts to shake off
All its leaves
Branches, and even
To uproot it

From under
A bulky boulder
Sitting still, meditating
Like a Buddha
A tiny bamboo sprout
Has just broken the earth
Ready to shoot up
Against the entire sky

With a resolution
Harder than a diamond
You burn yourself up
As your strike down from high above
Trying to warm up
The entire universe, even
At the cost of your own life
Short, but like a prolonged exclamation mark

Founding Publisher/Editor-in-Chief of Poetry Pacific:: Changming Yuan, 4-time Pushcart nominee and author of Chansons of a Chinaman and Politics and Poetics, grew up in an impoverished village in central southern China, began to learn the English alphabet at the age of 19 in Shanghai, and published several monographs before moving to Canada as an international student. While pursuing his graduate studies in University of Saskatchewan, he helped establish the Saskatchewan Chinese Monthly, a bilingual community publication based in Saskatoon and served as its chief editor until 1992. Since he obtained his PhD in English from U of S in 1996, he has been teaching independently in Vancouver. Changming began to write poetry in English during a family trip to Banff in early August 2004; since mid-2005, he has had over 800 poems appearing in more than 600 literary journals/anthologies across 24 countries, including Asia Literary Review, Best Canadian Poetry (2009, 2012), BestNewPoemsOnline, Exquisite Corpse, In Other Words, Istanbul Literary Review, Kwani?, LiNQ, London Magazine, Paris/Atlantic, Poetry Kanto, Poetry Salzburg Review, SAND, Saraba Magazine and Taj Mahal Review. With his teenager poet son Allen Qing Yuan, Changming founded Poetry Pacific on the Remembrance Day of 2012 - all poetry submissions are welcome year round at yuans@shaw.ca. For more detail or guidelines, please take a look at poetrypacific.blogspot.ca.