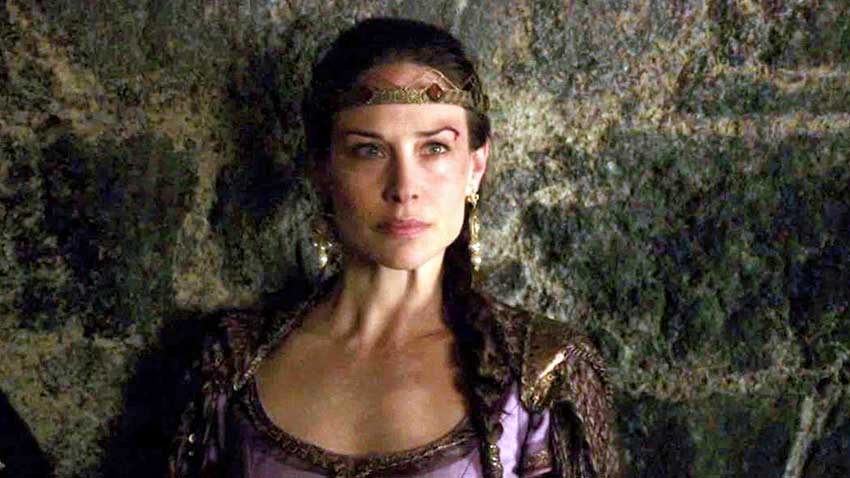 Egraine (also spelled Igraine) was the mother of King Arthur by Uther Pendragon.  Uther lusted for Egraine from the moment he saw her at a reception held by her husband the Duke of Cornwall – Gorlois of Tintagel – the father of Morgana, to cement an alliance between the two of them.

Uther asked Merlin the Wizard to cast an enchantment on him to make him appear as Egraine’s husband Gorlois so that he could enter into her bed-chamber and be received as a mate.  Needless to say, he also wished for Gorlois to be away at the time.  Merlin agreed to all of it, and secured for Uther not only a night of passion but also a permanent liaison with Egraine by leading Gorlois into an ambush to die.  The only price Merlin asked for this, was the fruit of that passion.

Egraine received Uther thinking he was her husband, she realized the error only in the morning when her husband’s body was brought in on a shield having been killed on the road by Uther’s men.  Nine months to the day after Uther had bedded Egraine, Merlin came for the child of that union, little Arthur, the once and future king.

Uther gave him up to Merlin as fair payment but changed his mind at the urging of Egraine who thought she had been punished enough for her error by the loss of her husband, she should not also lose her only son.  Uther ran after Merlin and was ambushed and killed by Gorlois’s men as revenge for the deeds he had done.  It is the last we hear of Egraine who passes from myth and legend into oblivion and the unknown.

I
Underdark shades of ebonite reflective subordinate tension
Imagining crisscrossing patterns in the depths of my loins
I am a mouse searching for blue cheese, the cheese of ascension
Give me some decade-old Port and a cracker, and I will spare you some coins

My mind falls awake sleeping the world I read around a corner
The legs of the Delphic tripod go in reverse, the cigarettes taste of sex
Give me a raincoat, and the Political Correctness feels all that much warmer
And the rain of illusionary votes drenches me in Russian electoral effects

Malta looms large, the golden cross that hangs around my neck sings
My heart listens to the tune of galactic super-novae ejaculation
I have impregnated the future, the man on the twelfth trump swings
I flip the cards over and over, and always the first one is the fifteen of elation

Arrogance is like a trip to France, drunk on a woman’s legs and wine
I caress the folds of her soft hair parting and ask forgiveness twice
She kisses me, demands money but takes the promise of love that’s mine
As long as I wed her sister and succumb to the lowest, most beautiful vice

We ride the train under the sea to emerge victorious on the dark side of the moon
The doves follow us, the TVs and burning computers turn their backs on me
The desert dust of the lunar Verne symphony burns in my brain a Germanic rune
I read it in a mirror, it reads in plain reverse, the sound of what I cannot see.

II
Interjected cocaine to fuel the night long succulent sultry satin escapade
I will myself to answer questions posed in the time of the middle
To wash myself in the pool of Egraine, and then to exhale as I fade
Emerge on the other side of microchip duality, like an unanswered riddle

No steppes to ride, no plains to walk, the road goes on till the ravens scream
Somewhere the freeways are full of cars that stop; somewhere concrete is soft
But here the chimneys have ended their exhaust fumes; they belch only cream
Spilling over the mountain tops like snow on the windowsill of a lover’s loft

I’d hide in the crevice just under the floorboards, and avoid the cat
But the cat sniffs me out and shows sharp claws; I am a poor little mouse
We play this game, till the dancing escapes the music and I spy a bat
Flying like a vampire low enough to scare the tiles off of the house

Words have picked up their books and taken out the pen and pencil
The feathers of the quill have burned off; only a hoof mark remains on the ground
Look beyond the veil of the hidden ablution; love can a basin-fill
I fluff the pillow, and my head feels heavy, and yet I still look around

The Welsh have come, I know not why, yet here they sing the Scots new year’s song
The stars have fallen, each one is ready to drown, and yet they sparkle with worry
I get up to leave; she pulls me down, her hand feels so right, her flesh feels so wrong
“Stay the night,” she says, to both I agree, the one who said yes, and the one who was sorry.

Jack Eason Aug 19, 2013 11
Literary Hazard No one likes to become the target of negative criticism. In a recent article written by Craig…
Publishing