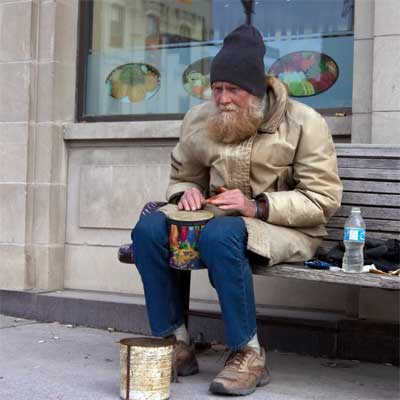 My name is Lawrence R. Berger
and I’m a proponent of reverse panhandling.
Would you like some change?
No really, would you?

You see
as I walk down the street on my way to the bus stop
I always pass the same three people, It never fails
they are there every day.

The first has a chain around his neck.
It’s held there not with a lock
but with a banjo.
The second’s a man of color.

Not black, but silver from head to toe
I found out recently his name is TRON.
The third one had his legs blown off in Vietnam
and all of them have cups in their hands begging for change.

I’ve lived there for a while now
and I’ve learned it’s really money they are after.
They count on the fact that people will through coins in their cups
as if to say” Go away! Hit the snooze bar! I don’t want your wake up call!”