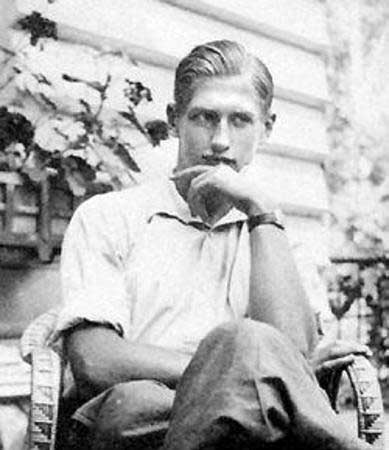 Krzysztof Kamil Baczyński – born January 22, 1921 – died on the fourth day of the Warsaw Uprising, August 4, 1944 – at age 23. Poet, Polish Resistance Fighter of the Home Army (Armja Kraiowa), member of Szare Szeregi – the Polish Boy Scout Resistance, and renowned author of the Generation of Columbuses (Kolumbowie), the young generation of Polish poets of whom many perished in the Warsaw Uprising. He was Roman Catholic from an assimilated Jewish family that converted from Judaism in the 19th century. Considered to be one of Poland’s greatest poets. – (His first name in English is Christopher – his middle name is a masculine version of the English name Camilla – and his last name is pronounced: BA-CHIN-SKEE).

For Krzysztof Kamil Baczyński, Poet, Polish Resistance Fighter, Romantic
on the 68th anniversary of his death during the Warsaw Uprising of 1944.

Take out my eyes, surgically or with a small spoon
For the hollowness of men’s hearts will overflow soon
A frightened rabbit in forest of dark wolf resolve
When will we finally cease our madness and evolve?

When you dig my grave, do so quick, and save some black earth –
…to shove into my mouth, to kill the spoken word birth
To shut me up, and my strange ideals to abort
Rip from my mouth’s womb the fetus of a Christian sort

Be kind then to wipe the blood off the blades of fresh grass
On the long forgotten Polish meadows that have passed
Digging trenches in concrete, the future to ward off
A grenade in one hand, a poem with a dry cough

For I believe in a Fatherland without a name
And the saints who walk there, hand in hand with the Bright Dame
She alone, knows our hearts are full of love, not dark rage
And can ask for His grace on us, release from sin’s cage

Harsh days fit for the Virgin Mary to carry us
As she carried the Christ Child… these ahead… they amass
And we all know the meaning of the hour is lost
In illusions spun of spider-silk, hope at what cost

Infernal maw, that opened wide at old Warsaw’s gate
Spilling forth diabolical men, machines of hate
Stirring rusted swords to come to life again and sing
Breath in lung, blood in heart, in the sky an eagle’s wing

A dwelling of the dead among us the living, now
To stand atop graves, to raise a fist to the sky, a brow
Furrowed with the worry of the past, future’s unknown
Seeds of doubt, fallen apples, we reap what we have sown

Look at me long – what am I, if not a lost feather
From the passing by wing of a white eagle, weather –
Changed, flags changed, against the backdrop of war, guns, flesh, blood
Here is the rubble beneath my feet, the footsteps of God

Here the last moment lingers without a name or face
Light of daylight meanders across the human race
Freedom of choice, a bullet flies across time and space
On the Fourth day of that August, in a ruined place.

The Clarity of Catawampus

Diane Wylie Apr 22, 2016 0
The Mayan Influence The Mayan civilization captured the attention of some folks recently with the…
Featured