They were Huckleberry Hound cufflinks, one of my favorite cartoon characters.
I wore them to church one Sunday.
My parents were in the regular church service,
but I was in Sunday School, that’s what they called it then, probably still do. 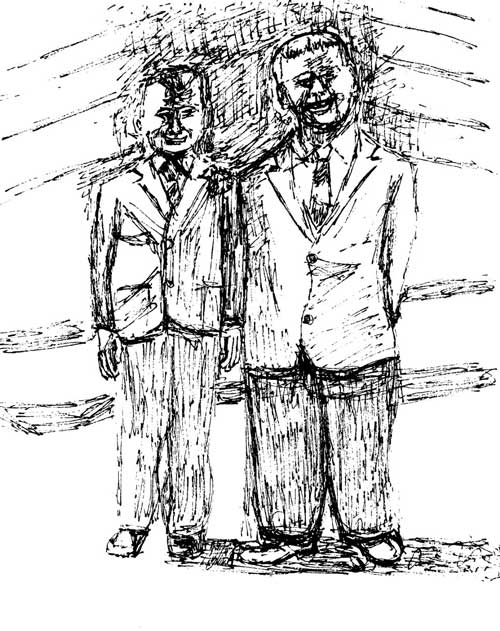 I never liked that class, they taught us about Jesus,
we made pictures with paste and colored paper to show something
from our Bible lesson.
I always got the paste on my dress pants.

I would look down at my pants and think: again? Not again? Every time.
Somehow my Huckleberry Hound cufflinks came off my shirt cuffs.
Maybe they fell off, became unhooked.
After a while, the Sunday School teacher announced someone had lost
their cufflinks.

She held them up for all the boys and girls in class to see.
She said if one of us could identify what type of cufflinks they were
she would know they belonged to that person.
I looked at my shirt cuffs and realized they were mine.
“They’re Huckleberry Hound cufflinks,” I said.

After class, I told my parents about the cufflinks.
They went to speak with the minister about getting them back.
Later we drove home.

I didn’t get my cufflinks back.
When my folks asked the minister
he said the boy who had taken them belonged to
a respected family in the community and
he didn’t think it would be a good idea to upset them with
the news of the theft.

After a while, we didn’t go to church anymore. On Sundays, we’d
go for a drive

instead. I liked that a lot better,
and also liked not getting that paste on my pants.

IFWG Publishing Sep 14, 2012 2
A writer should understand to a point of second nature that writing a piece of fiction is the art of simulating…
Science