The computer sat on a desk. Around it stood many boxes with files.

The files were those of inactive clients. Charts full of purged materials. Documents of things that were; events that had long past. 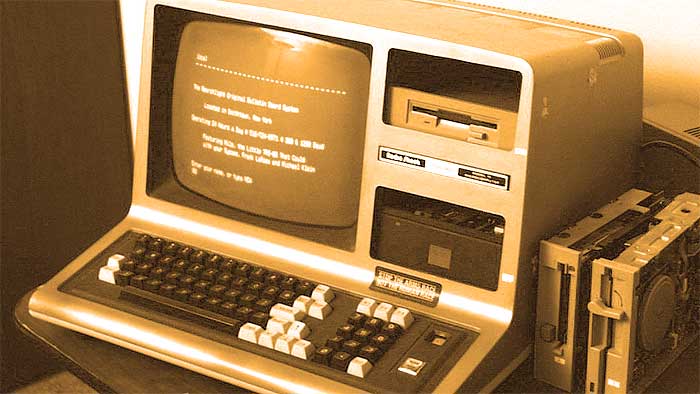 The computer sat on the desk. In back of it hung a print by Georgia O’Keefe. To the side an empty box for Xerox paper reams. A cable hung loosely off to the side. Dust had collected in the corners. There were bits of loose junk here and there.

The computer sat on the desk. When one looked at it from an angle, the imposing size and the massive monitor stood out like monolithic symbols of unreachable grace.

The gray case of the computer, rounded at the corners shone with dull metallic hue.

The computer sat on the desk, massively. It had disk drives, and by God, they were full-height disk drives, not the rink dinky half-height things that were to come later.

And they were long, long and thin, five and a quarter inches of floppy length that did not have a slot to cover the hole, but a tab that pulled down and made you shudder at trying to pull it back up, with that clang, that awesome clang.

The computer sat on the desk, with power. Inside its massive steel case, which weighed close to a ton there were circuit boards and wires and cables, and all manner of good stuff made of silicone and copper, with gold etchings and plastic, and fiberglass and oh boy, chips.

The computer sat on the desk, alone. All the other computers beat a rhythm to new glitzy programs, but this computer was turned off. Its green and black, monochromatic monitor with three knobs, and a logo, sat on top of the case and waited. Patiently it waited to be turned on.

The computer sat on the desk, silently. In the Xerox room, there cranked out a thousand copies out of a machine already obsolete but too useful to be abandoned. In the offices there hummed to the tune of some snappy CDs: Pentiums and Cyrixes and PowerPCs, all crackling and thumping, spinning their gigabyte hard drives on, and on, and on, and on.

And the RAM in those machines pushed hundreds of millions of bytes up the electronic ladder to cyberspatial Nirvana.

The computer in the back room, sat on the desk, off. The Hewlett Packards and Macs, the Compaqs and NECs all tuned to a channel on Windows, or Mac OS, with GUI and icons, a mouse at every desk nibbling away at the t.s.r.’s allocation and the lines of code, oblivious to pithy, cannibalizing every spare bit of randomly accessible memory and fixed medium storage space, bulging the file allocation table and making Shwartznegger look thin by comparison.

While in the back room, the computer from yesterday sat, turned off, alone.

The computer in the back room was dead. Inside its cold roomy interior were hopelessly outdated and oversized components. RAM that wouldn’t drive an applet today, storage on the bulky fixed drive that wouldn’t store the clip-art from a third party add-on today, a keyboard so heavy that it outweighs a lap-top, a disk drive for floppy’s that you have to shop for with 3M.

A monitor smaller than the camcorder preview screen, with color more annoying than the tint of your personal organizer, and a processor, a central processor, a C.P.U. that wouldn’t compute your Quicken documents if its life depended on it.

The computer in the back room was quite dead.

But though outmatched and infinitely outrun, at less than 4 MHz and less than a meg of memory, the 8088 Intell Microprocessor still impresses me more than the Pentium or the Cyrix, or the 486dx4’s or the P6’s or the power of the PowerPC, those risky reductionists inside, the Motorolas; the Hondas, the Kawasakis of our times, make the rink dinky, yet sturdy Model-T Ford, hum with the imaginary intelligence of an amoeba.

But if there were someone to turn this behemoth on. Bring it back to life, resurrect the dinosaur from its Jurassic period. Hear the beep and the loud fan. Watch lights on the panel, click on.

Wait for the screen to fade into zombie-ish algae-like existence, there would come a “C prompt,” generated by the engine of a disk operating system that still puffs beneath the awesomeness of Windows-95, that still makes grown men, accustomed to computers cringe and in frustration cry, an operating system, unlike the Mac OS.

Or all the graphic user interfaces for moronic idiots who can’t even type and need voice recognition systems to write a simple letter, an operating system that like the VW Bug, is tight and uncomfortable, that is, unless you have taken the engine apart and remain spellbound by the sheer simplicity unmatched by the unbelievable complexity of a brand new Ferrari twelve-cylinder.

The computer sat on a desk. It had the logo of a typewriter on it. And much like the typewriter that it killed without mercy, it too has been relegated to collecting dust. Brother of the Xerox, sister of the automated cash machine and Unix, the IBM PC, with its 8088 microprocessor from hell, sat quietly among other discarded items, such as a black and white TV, a transistor radio, and those good old rotary telephones from AT&T that made the telegraph, and letter writing obsolete. No, this is no eight-track, this is no Sony Betamax.

Brother, in this backroom full of dust, there beats the heart of the Big-Blue sperm whale, eaten by sharks, nibbled on by piranhas and hunted down by an industry that undergoes mutation every three months, yet I ask you, go into that back room, see the computer, and tell me if it doesn’t send a shiver up your spine, tell me if it doesn’t make you weep when you consider its birth is the signal for the ultimate obsolescence of. . . man.

On The Ninth Anniversary Of That Indelible Tuesday