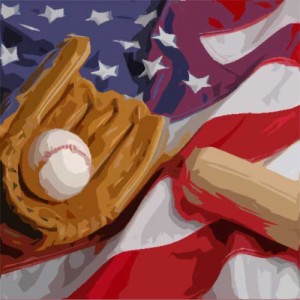 I remember that walk down Avenue A
to a field painted with white caulk
shaped like a diamond –
Boys in matching suits praying; asking God
for a home run, making the sign of the cross
as they approached the batters box.

Me – I loathed baseball – everything about it.
Frozen flavored ice pops, fudge bars, or a
Milky Way made me stay.
All that noise!  Spectators screaming, parents
complaining, pleading, “Let my son into the game.”

Moments before those parents stood tall with
their hand on their heart as they listened to
the National Anthem, and stared out toward
center field where the American Flag blew.
Will never like baseball – no matter who was there.

Enjoyed Italian ice – my hands squeezed white
cups as ice dripped over the edge, lick it, lick it. . .
Mama – she loved it – all of it.
She screamed when a boy struck out, or waved
her arm’s into the air, swearing at the ump.

Mama – she jumped higher off her seat when
it was my brother who made a home run.
She loved baseball – she wanted to play too.

Mama believed women should be able to
coach baseball.  She knew baseball, keeping
box scores in our living room – every game
during the World Series.

I hated it, baseball.
One day I got my way – we left early
because scraps of paper – paper from
my Milky Way Bar – twisted in circles – lifted
up off the pavement and air turned thick
as paste, a sky turned shades of grey blue
to a pale shade of green.

Mama told others, “A storm is brewing.”
Those women sitting on bleachers laughed.
Mama knew, and grabbed my hand –
tugged me into the cement clubhouse –
you see – no one listened to Mama – not
during a baseball game.

Not those women selling candy or those
frying dough.
Not the one yelling to her son to throw the
ball right – keep his eye on the catcher.

You see – they laughed at Mama’s fear.
Women laughed when we entered the clubhouse –
laughed so hard their stomach’s jiggled.

Mama and I gazed through a small peephole
near the big black frying pans where pizza fête fried –
we watched people running, and then the crowd inside
the clubhouse began to grow, air grew thin.

No one cared what type of pitch was thrown, or
who was winning –
No one noticed the American Flag lifted from a
metal pole –
No one noticed players in a dugout searching
for their parents –
Rooftops – blown from buildings – tossed like toys
on streets; markets exploded, and homes turned on
their own foundation.

The game now over.
Crystals of rain slammed against the cement structure.
Wind blew against the backs of those who wouldn’t listen.
The skies turned to midnight.

Women who laughed – pounded on the door to
squeeze fat bodies into thin spaces.
You see – I hated baseball.
I hated baseball, but, I hated storms even more.
Mama knew it.