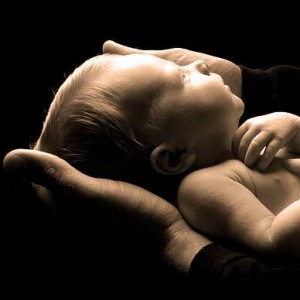 Blessed her three times, God did.

Their first born Papa had a chore,
to bury his first born son –
borrowed an old Ford from a friend
to drive a small white coffin situated
on the back seat, to Middle, Mama’s
hometown, near the border of Vermont.
Buried him at the foot – of Mamas’ Papa’s
grave.

Mama talked about the baby – his beauty –
strength – being the largest of the
rest of us. . .
You see, no one knew of a blood disease
back in nineteen forty-five and later,
brother two – he survived.

It was a clear September day,
leaves barely showing a tinge of red,
children stopped playing kick the can
in the market lot, school no longer out
clothes taking longer to dry, strung
across our yard from house to fence.

Mama said, “I was standing
at the double sink washing dishes
and squeezed a dishcloth until my
fingers turned white, then my water
broke.”

The doctor sliced her belly
from side to side, lifted from her
a baby girl – but, no one smiled,
no one talked or even whispered –
instead she heard,
“She won’t survive the night.”

You see, Mama she believed in Saints
and angels, stuff like miracles – dead
people talking.  Yet over and over she
kept hearing, “premature babies die.”

It was the time of wide brim hats –
stockings drawn down a leg using a
black pencil.
A time of running boards on automobiles –
crank out windshields and big back seats.
A time when telephones
were made up of party lines.
A time of strange lines covering a screen
of a black and white T.V. –
A time when Dave Garraway inhaled
cigarettes as he told the news.
Papa kept telling Mama, “One pound babies
don’t grow right.

She’ll be blind or won’t walk…”
Papa believed in prayer and stuff, but
never miracles, since his own
Papa died when he was only ten,
he stopped believing then.

But, Mama, she stopped crying once
her own Papa and a stranger came to visit –
You see, her Papa died two years before –
and the stranger – Papa’s Dad –
both sat on either side of her bed –
telling her the baby will survive. . .

Told Mama she will wear velvet shoes –
ribbons in her hair.
She’ll ride on her Papa’s shoulders,
play hopscotch and dance on toe –
told her, God knows.
But, you have to touch her, feel her skin –
snap the bottom of her feet.
You have to pinch her cheeks.

Told Mama not to worry, her daughter
will catch up to all the babies on the street.

Mama said, “You were a special flower” –
I guess some flowers need special care –
but, with love flowers do survive.